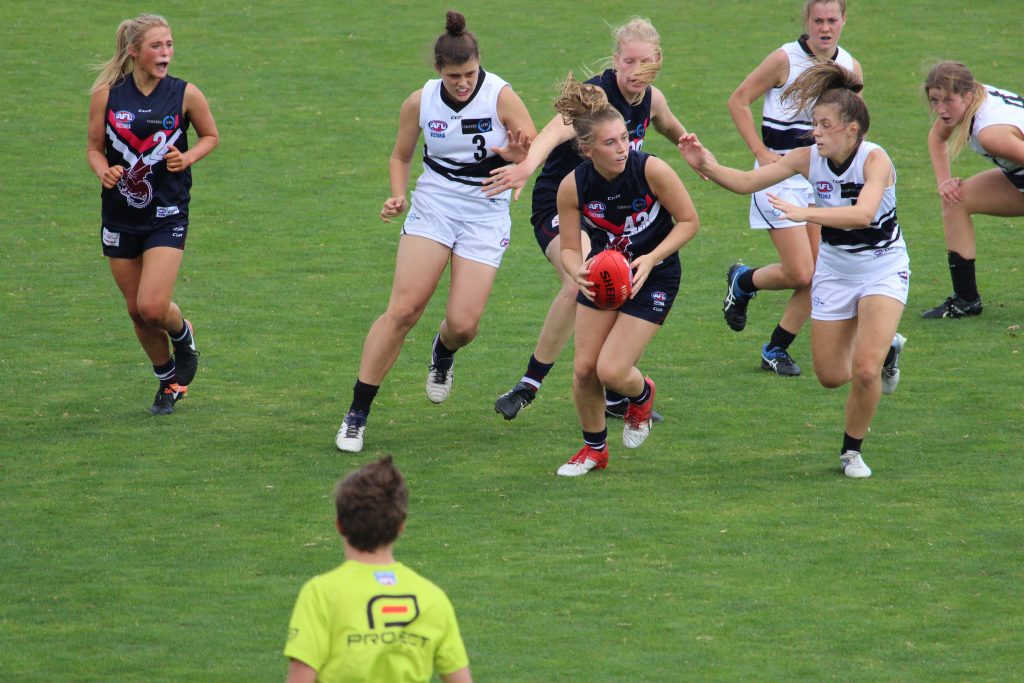 SANDRINGHAM Dragons midfielder, Abbie McKay might the daughter of former Carlton player, Andrew McKay, but she is making a name of her own in football.

McKay starred in the middle of the ground for the Dragons this year, being named among the best players five times during the nine-round season.

With a father who played 244 games for the Carlton Football Club, footy was always in McKay’s veins. Her early memories of the game were not watching her dad play, but simply kicking the footy with him at the park.

“My dad played 240 games or something like that so I always grew up with it (footy),” she said. “I had to go and kick the footy at the park with my brother and him so that’s how I got into it.”

Despite his illustrious career, McKay admits she was oblivious to her dad’s role at the Blues.

“He was just my dad so to be honest, I probably didn’t realise he played for Carlton,” she said.

After a couple of Auskick stints, McKay turned her attention to basketball, netball and tennis. Then at 15 years of age, she found her love for football, but this time, she had her mum to thank.

“When I was about 15, my mum just thought it would be fun to start up a team at the local club,” the now 17 year-old said. “So we got together with lots of school friends and my love grew from there. I just got out there and I was like this is so much fun, I get to tackle!”

In her short football career, McKay has already achieved so much. When she was asked to play for the Sandringham Dragons in the TAC Cup Girls competition, she was given the belief that she needed to pursue her footballing career further.

“I got asked to join Sandy Dragons and I was like ‘oh maybe I actually have a shot at this’,” McKay recalled. “I thought I may as well give it a go. I didn’t really know what it was so I just got asked about it and thought I’ll just go down and see what it’s like. Then people told me about how big it actually is. I was like that’s pretty cool!”

After a solid season at the TAC Cup Girls club, McKay received the shock of her life when she was named in the Vic Metro squad for this year’s AFL Women’s National Under 18 Championships. The 17 year-old says she didn’t see the selection coming, but is thankful for the opportunity.

“Never in a million years!,” she said about her thoughts on ever being selected for Vic Metro. “I got asked and I was like ‘really? You want me?’ It’s so cool and getting to know all the girls is really nice.”

On top of that, she is keeping the McKay name alive at Carlton, as she is currently training with the Blues’ VFL Women’s side. But above all, McKay is a role model to her younger sister, who loves the game and wants to be just like her big sister when she grows up.

“She is obsessed (with football),” McKay said. “Every time I get back from Vic Metro she asks ‘are you going to become a footy player yet?’ I’m like ‘don’t get your hopes up too soon!’ But no she loves it, she wants to be the same when she’s older.”