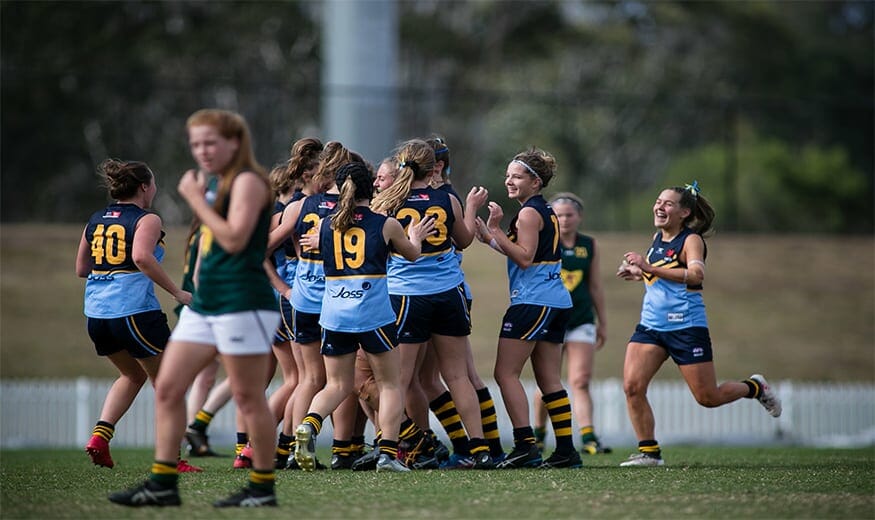 AS the opening series of the AFL Women’s National Under 18 Championships continues, four teams took to the field on the weekend to display their skills. New South Wales and Australian Capital Territory (NSW/ACT) and Western Australia were the big winners, with many players standing out across the four games.

NSW/ACT kept Tasmania scoreless up until half time, asserting its dominance at Blacktown International Sports Park.

Libby Haines was also impressive, named amongst the best for Tasmania. She was joined by Mia King, Kelsie Hill, Tahlia Bortington, Hailee Baldwin and Netty Garlo. Mya Slatter was Tasmania’s only goalkicker on the day.

Western Australia recorded a brilliant come-from-behind win at Domain Stadium. Queensland led at every change but after being kept scoreless in the last quarter, Western Australia ran over the top by just three points.

It was a brave effort by Queensland, whose goals came from Charlotte Hammans, Jemma Abbott and Georgia Brehmer. Dee Heslop was named best-on-ground for Queensland and was complemented by Lily Postlethwaite, Kitara Farrar, Lauren Bella and Zimmorlei Farquharson.

In the second battle between NSW/ACT and Tasmania, it was NSW/ ACT that came out on top with another big win.

Backing up their solid performances from their last match against NSW/ACT were Tahlia Bortington, Hailee Baldwin, Libby Haines, Netty Garlo and Mia King. They were complemented by Elise Barwick, who played a solid game against NSW/ACT.

Western Australia continued its winning ways with another big victory over Queensland.

AFLW Academy member, McKenzie Dowrick was again named in the best for Western Australia. This time she was joined by Mikayla Bowen, Emma O’Driscoll, Roxanne Roux, Abbey Dowrick and Taylor Pescud. The goalkickers in the last match stepped up again on Monday’s hit-out, as Kate Bartlett got on the board with two majors while Sabreena Duffy and Mikayla Hyde each kicked one.