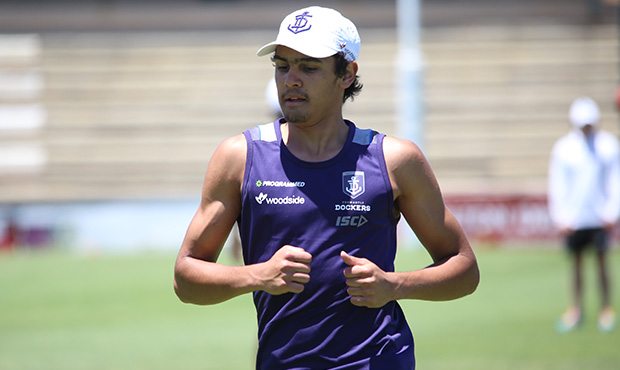 PREPARATION for the upcoming AFL season and beyond is in full swing for both WA clubs, with Next Generation Academy recruits finalised and the JLT Community Series underway.

Hailing from Wyndham, 3200km north of Perth in the club’s Kimberly recruiting zone, Carter will switch to Fremantle-aligned WAFL club Peel Thunder until his permit runs out on September 25.

A dashing winger with blistering pace and excellent foot skills, the move will allow Fremantle to mentor Carter and expose him to the club’s tactics and style of play in the hope of drafting with a Next Generation Academy bid.

Carter was an underage selection in last year’s Western Australian State under 18s team and was expected to have a major impact in the national carnival before injuring his knee in the squad’s final trial game.

A statement issued on the WAFL website says the governing body will monitor Carter’s position as an NGA recruit throughout the WAFL season.

“The permit to play for Peel Thunder has been issued in accordance with WAFL rules and regulations and the AFL’s national NGA eligibility criteria in the best interests of Jason’s ongoing development and welfare,” The WAFC said in a statement on its website.

“This will allow him to fully participate in the NGA program with Fremantle and WAFL partner club Peel Thunder, which includes relocation arrangements to live with a Fremantle Football Club host family in Perth and assistance from the club’s player welfare staff to commence an employment traineeship.

“The West Australian Football Commission will continue to monitor the NGA program during its inaugural year of implementation in 2018 and will assess all permit requests on a case-by-case basis with careful consideration given to balancing the best interests of the player and the WAFL competition.”

In terms of WAFL finals eligibility, Carter must play a minimum of five WAFL games – including a minimum of three league matches – as well as being subjected to the new WAFL AFL listed player cap, which states that both East Perth and Peel Thunder are only allowed 12 AFL-listed players in a grand final team.

Fremantle went down to the Adelaide Crows 13.13 (91) to 12.9 (81) in the outer suburban Adelaide town of Strathalbyn, after Crows forward Tom Lynch kicked two goals in the final two minutes to snatch victory.

Nat Fyfe was the pick of the Fremantle players with his marking and contested possession work on full display, while maligned forward Matt Taberner showed signs that he may develop into the key forward Fremantle so desperately need.

West Coast had a hard fought win in a willing affair at East Perth and Subiaco’s home ground Leederville Oval, with an 8.8 (56) to 8.6 (54) win over Port Adelaide.

A 65-metre bomb from Lewis Jetta in the final minute of the game was enough to see the Eagles claim victory.

A talking point of the game was Robbie Gray’s shoulder bump to the head of West Coast swingman Jeremy McGovern, which has since seen him be offered a one-week ban by the AFL’s reconfigured one-man match-review panel.

A highlight of the game was former Subiaco star Liam Ryan, who showed his amazing aerial ability with several huge leaps, as well as kicking an opportunistic goal from his first game in Eagles’ colours.