Was AFLX a hit or a miss? 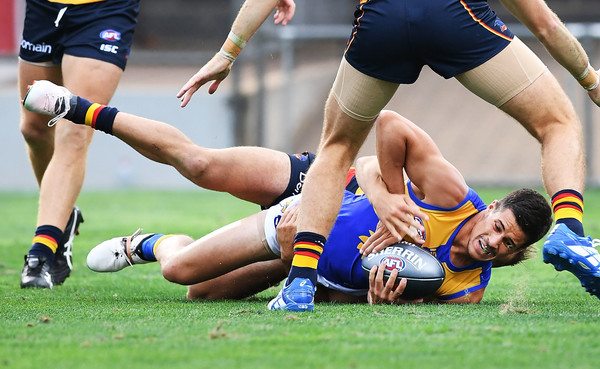 IT was the newest addition to the AFL’s growing repertoire but was last week’s AFLX round robin experiment exciting or just a glorified training drill?

The 10-player-a-team format was trialled for the first time last week with six teams per night in three different states and brought about mixed responses immediately after its debut with the Herald Sun’s Jon Anderson and ABC’s Richard Hinds at polar opposite ends of the enjoyment scale. The television ratings suggest it was a hit on the first night of competition – 673,000 tuned in to Channel Seven’s coverage at some point during the night – but the average audience was just 171,000. So was that interested viewers switching off in disappointment? Or was it traditionalists letting curiosity get the better of them eventually? An audience of 82,000 that tuned in on Foxtel made it the most watched subscriber-based time slot on Thursday night. The television ratings on Friday the second night of competition had 75,000 TV viewers, which was a significant drop in ratings from the first night. Then on Saturday, just 70,000 watched the AFLX on Foxtel and on 7Mate – Channel Seven’s third channel – 71,000 viewers tuned in to watch AFLX. This could be because fans were sick of watching a game where there was “no physicality, no crunching tackles – barely any tackling at all” which make Australian Football unique and great.

The AFLX begun on Thursday night at Hindmarsh Stadium in Adelaide. The Crows were too strong for Geelong in the Grand Final. Many of the players on the opening night of AFLX did not like the silver footballs that were used, most, such as Adelaide’s Kyle Cheney saying it was more difficult to use compared to the traditional Sherrin. As a result of the players who voiced their concerns about the silver ball the AFL went back to using the traditional yellow ball for the remainder of the tournament. All the players from opening night were happy to be out there again playing football even though it was only pre season. Geelong’s forward Tom Hawkins told to Fox Footy that playing AFLX was “bloody good fun.” By the end of the night the players were tired due to the AFLX being such a fast paced game based on skills. Fremantle’s Bradley Hill when asked by Fox Footy his thoughts on AFLX said “it’s actually alright to be honest, I was struggling a fair bit myself but I reckon everyone is struggling just as bad if not more.”

The feedback from the coaches was mixed. In his post-game interview for the club’s website, Collingwood assistant and AFLX coach Robert Harvey believed the players were on board for the new competition. “I think the players enjoyed it, like come over different concept very different to an AFL game but best thing for us we exposed some really young kids and they just looked really good and its good experience for them under that environment like playing other AFL teams,” he said. However Brisbane coach Chris Fagan was not a fan of AFLX due to the lower fan engagement, such as celebrating after goals. Fagan also disliked it how players are used as guinea pigs for the experiment putting them at the risk of injuries before the season proper. He still wants the AFLX to work but believes there are a lot of improvements needed. “It’s good that they are trying something new – every time you do that you learn how to make it better,” Fagan said. “I am sure the AFL will seek feedback from clubs to help bring a better version next time but they have to start somewhere.” Many AFL fans were quick to criticise the modified game of AFL, however the game was created to fill the gap in the International market and AFLX may be the way to do it. If we want to see some sort of Australian Football played globally then AFLX might be the way as many grounds overseas only have rectangular soccer pitches.

I believe many concerns from AFL fans regarding the AFLX competition might be subsided if it was held in the middle of the AFL Premiership Season. That way I believe it would not take the shine away from the AFLW. These women are trying to make names for themselves and have their football brand recognised but how can they if the competition clashes with AFLX?

I believe we should have the AFLX played across three nights mid-season, mirroring the NBA’s All-Star Weekend. On night one of competition there could be like an AFLX Rising Star game showcasing the talents of those players who are aged under 22 to face off in AFLX. Then on night two of the competition, the match could be an All-Star battle such as Team Ablett versus Team Fyfe.

The AFL could also follow the NBA’s lead in its All-Star match selection process. Fans choose their All-Stars and then once the captains of both teams are chosen, they select their teams. I believe this will be a good way to include fans and therefore fans will feel a greater part of this new AFL game, which I believe is a win for the AFL. Then on the final night of competition, the retired legends of our great game can play in a Victoria vs. All Stars match similar to the EJ Whitten Legends game.

My suggestion for making the AFLX more of a spectacle for viewers is to include these big name AFL players in the competition and that is more likely to occur if it was played mid-season, with the AFL perhaps giving a two week break to ensure no fatigue for the second half of the season. This would be a great way for the AFL to promote the AFLX internationally as well, because they could take these teams around the world to help with the promotion of the new modified format. You be the judge, but I believe the AFLX will thrive more if it was to model the AFLX on the way the NBA runs it All-Star Weekend, as it is one of the most watched globalised events. The AFLX was created to fill a gap in the global market and to take our game internationally and I believe this concept will fill the gap, as will showcasing our game’s All-Star talent.

How do you think the AFL should market AFLX?