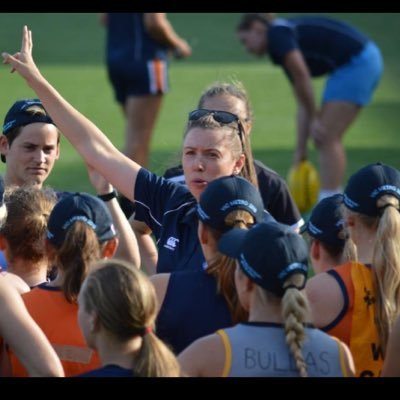 FOR eight years Natalie Grindal has seen the transformation of girls footy, going from a 30-player state academy team that would train together; to now a clear pathway for girls to play footy at the highest level at AFLW.

Grindal highlighted the importance of the AFLW, and how it has given young girls something to strive for in the future.

“I been able to watch it grow from two to three teams to where it is now,” she said. “I guess training wise, that has changed a lot as well.”

The Northern Knights Girls high performance manager believes that the people that the teams invest into the program have contributed to the success and continual development of the girls program.

“I guess when I started so many years ago it was just me being the strength and conditioning coach and now I am High Performance Manager of the girls team,” Grindal said. “I have two strength and conditioning coaches working for me. “I have a rehab coordinator, we have a dietitian and trainers. “With all these people helping me, it gives the girls the best program possible.”

The high school teacher says the thing that she loves about working with the girls is their attitude towards training and their willingness to take opportunities that come their way with both hands.

Grindal and the entire high performance team pride them themselves on being the benchmark in the TAC Cup girls competition and try to emulate the goings on of an AFLW club during the season. Initiatives such as Smartabase allows the team to manage the girls wellbeing and training loads.

“Smartabase is something all AFLW use,” Grindal said. “So the girls just have access to it on their phone and takes a couple of minutes to fill in the morning and then a training report in the evening.”

“It is just another thing that makes our program be that one bit better, and helps the girls if they get drafted, walk into an AFLW club (and they) won’t have to be told how to do it because they will know it.”

Grindal says it has been quite funny this season as in previous years of working in girls footy clubs she has been the only one organising and running her area, where as this year she has had the ability to teach the other staff and delegate roles.

“I’ve got an awesome staff of people that are eager to learn; they all want to get experience.”

However sometimes she can’t help herself and will get involved in the action, chatting with the girls and making reflecting and continually improving the the program to be the benchmark.

Grindal believes the girls are eager than ever as they can now see a pathway in the form of AFLW.

“I don’t call them girls or players, they are athletes,” she said. “They have got a pathway, they can see what they can get to. It also helps me because I can say, you are doing this to help yourself get to the next level.”

Everything we teach them and that they learn is what they will need to do at an AFLW club and not be lost when they get there.”