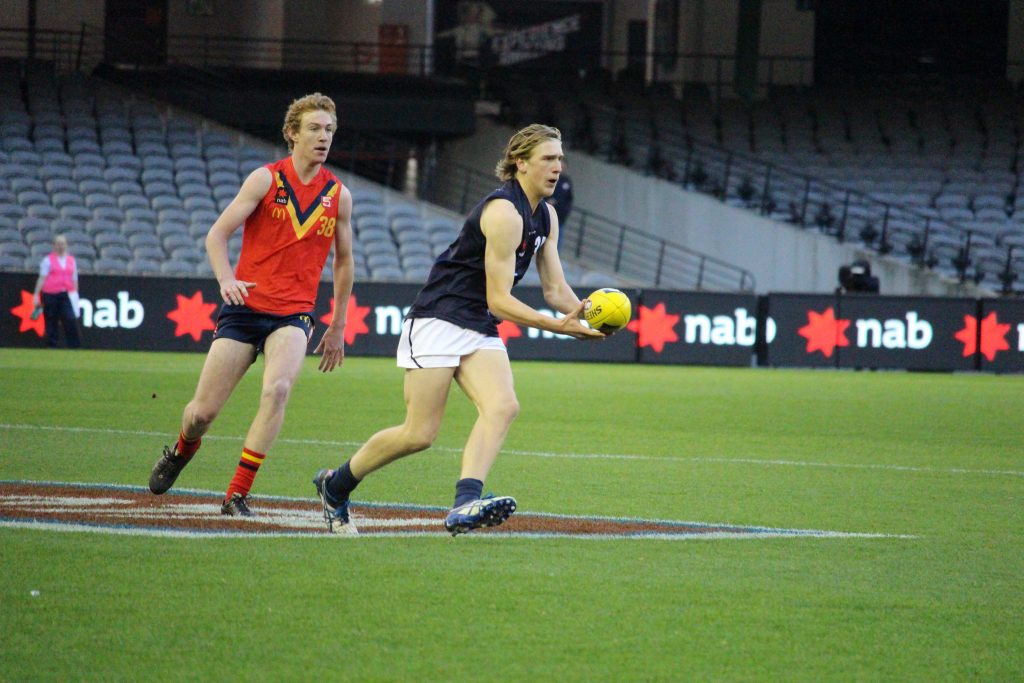 TALENTED Vic Metro teenagers have pressed their case for the number one pick in the fourth round of the NAB AFL Under 18 Championships.

Possible no.1 picks Will Sutherland and Cameron Rayner were damaging in the attacking half of the ground, with Sutherland’s clean pick ups from ground level impressive, booting two goals from his 13 disposals. Rayner showed his power, clunking multiple contested marks completing an impressive outing with 16 disposals, seven marks and five goals.

Eastern Rangers forward Jaidyn Stephenson had his best game of the carnival with 28 disposals and five goals, showing off his good burst of speed.

Metro’s 190cm players Nicholas Coffield and Charlie Constable both looked first round selections and will no doubt be in recruiters minds as possible top ten selections.

Coffield’s composure in the defensive half of the ground was impressive and his poise with ball in hand was impressive to collect 19 disposals. Constable backed up his best-on-ground performance from last week with 23 disposals, seven marks and a goal, again showing his cleanness through the midfield.

Metro captain Joel Garner (eight disposals) cracked in hard when he needed to go, but suffered an ankle issue in the second term – that left him on the bench for the entire last quarter.

In his first game back from a quad injury, Sandringham Dragon Andrew Brayshaw showed good signs with 20 disposals and five inside 50s attending multiple centre bounces.

In what was a disappointing day for South Australia, bottom-ager Izak Rankine was their best gathering 22 disposals. Rankine showed off an elite side step and booted a goal from the pocket in the tightest of angles.

Tall Defender Harrison Petty was one who may’ve increased his draft stocks, marking well in defence and distributing the ball well on his right foot. Petty finished the day with 18 disposals, seven marks and six rebound 50s.

South Adelaide tall Nathan Kreuger showed promise in his opening game of the Under 18 Championships, booting a goal in the second quarter, providing a marking option up forward for South Australia. Kreuger finished the day with 16 disposals, eight marks and five inside 50s.

Possible top ten draftee Darcy Fogarty was unable to get into the contest, recording just four disposals and three tackles.

Both sides will converge on Simonds Stadium on Wednesday, with Vic Metro playing the Allies at 2.10pm, while South Australia will face Vic Country at 4.40pm.