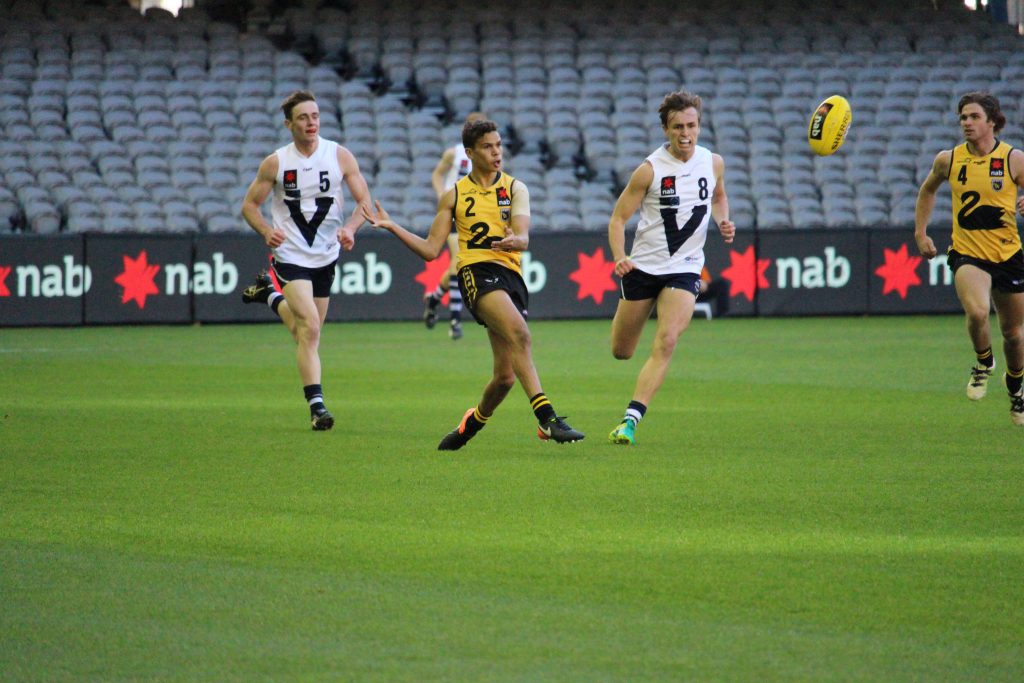 BOTTOM-AGER Ian Hill has led Western Australia to their third win of the NAB AFL Under 18 Championships with a strong performance up forward at Etihad Stadium on Friday.

The 17 year-old showed off his speed in the attacking half, collecting 24 disposals helping Western Australia to a 29-point win over Vic Country in their final outing of the carnival.

Hill is eligible for the 2018 draft and is one of the top talents spoken about for next year’s draft crop touted as a ‘super draft’ by some.

Small forward Jarrad Fazioli was another bottom-ager to star, booting three first half goals – finishing with four goals as the away team were damaging with their extra leg speed.

The match begun with an error-riddled opening term, but it was Western Australia who kicked away with three goals-to-one. Tall forward Oscar Allen proved a challenge for the Country talls, providing a target down the line with two goals in the opening half.

AFL Academy member Jake Patmore found plenty of the ball through the midfield, getting to the right positions, leading the disposal count at half time with 17 disposals, eventually running out with a game-high 32 disposals showing his class in the midfield.

Midfielders Callan England and Brayden Ainsworth (26 disposals) again were prominent in WAs victory, finishing off their Under 18 Championships campaign with three wins and a loss.

Vic Country’s possible no.1 pick Luke Davies-Uniacke worked into the contest in the second half, using his strength at the contest finding 23 disposals, clunking a few marks and booted a goal after the siren in the third term to give the home side a sniff.

Ruckman Bailey Williams brought the margin to under 10 points in the final term, but WA co-captain Oscar Allen was able to clunk a excellent pack mark and slot his third goal for the day from a tight angle, making the margin far too great to Vic Country to overcome.

Dow showed his burst of speed that he has from the stoppages, booting a nce goals in the third term. O’Brien distributed the ball well off his classy left foot and used his voice well around the ground.

Geelong Falcon Matt Ling was another who impressive in glimpses, including a run down tackle in the opening term. His agility and speed were on show across either wing, where he was willing to take on his WA opponent.

Geelong Falcons duo James Worpel and Cassidy Parish worked hard on the inside for Country, battling against the quick WA midfielders, while Ethan Floyd used his left foot well on the outside, finding 19 disposals.

Western Australia remain in contention to win the NAB AFL Under 18 Championships, relying on Vic Metro to loose their remaining games. Vic Country will have a chance to redeem themselves on Wednesday against South Australia at Simonds Stadium.