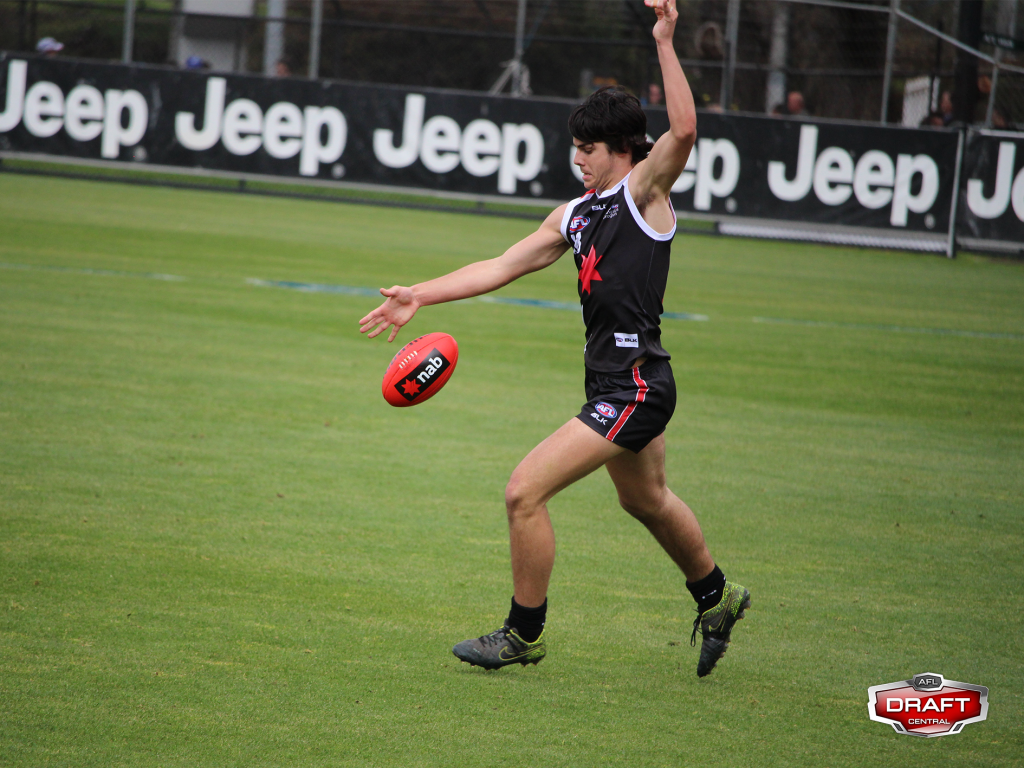 A NUMBER of South Australian teenagers pushed their case for a call-up to the state under 18s team for the final rounds of the National Under 18s Championships when players returned to club and school football. David Chapman takes a look across the grades to see who stood out.

Reserves:
This weekend saw byes to Sturt, Port, South and Norwood. In the Eagles’ loss to Glenelg, Cooper Gaffney was best with 29 disposals – his consistent performance have seen him called up to the under 18s state team for the Vic Country/Metro games. Underage superstar Jack Lukosius was also dominating up forward with 19 disposals, kicking 4.2 and clunking eight marks, to be a realistic top draft pick for 2018. Isacc Moller chimed in with two goals and nine marks, with defender Tom Schmusch getting 14 disposals. Wests Jakob Heitmann only got the nine disposals in their loss to North.

U18 CHAMPIONSHIPS: Round Four teams

U18s:
For Norwood, midfielder Stefan Giro, was best in their win over South with 37 disposals including two goals and 18 clearances. Ruckman James Siviour with 18 disposals and 10 marks was second best whilst dominating the hit outs. Lachie Pascoe playing mainly through the midfield collected 40 disposals including 7 marks and 13 rebounds to be in the bests for Norwood. For South, Luke Bogle was again their best with 26 disposals (21 contested), three goals and eight tackles.

In the Eagles 135-point demolition of Glenelg, Matt Longbottom had a comprehensive best on ground performance with 37 disposals, nine marks, 11 tackles and one goal for an incredible 179 Dream Team points. Underage forward Dom Pratico kicked six goals with his 17 disposals including 11 marks (sevn contested) to be second best. Glenelg’s Harrison Boyle was his sides best with 35 disposals, including seven tackles.

In Sturt’s three-point win over Centrals, State defender Brandon Zerk-Thatcher (22 disposals including nine marks) led the defence, State midfielder Mitch Crowden (25 disposals) despite suffering the heavy tag, created the match-winning clearance and state forward Jordan Houlahan (15 disposals and a goal) marking strongly up forward, were in the bests. Ed Allan was also consistent with another impressive 36 disposals, one goal and 13 clearances.

Centrals in their typical even spread had good performances from Ryan Falkenberg with 19 disposals including a goal in the closing in the last quarter to reduce the final margin, and Ryan Humphries-Carnelly with his nine tackles were Centrals best. In another nail-biter North defeated West by a point in the late game. North’s Mackenzie Slee was among the best with his 25 disposals with his typical aggressive rebounding game.

On a weekend when both the State U16s and State U17 Futures teams headed to the west, this left the schools with a few players missing. Thursday night saw PAC host Rostrevor at Norwood Oval under lights. With touted high draft pick Darcy Fogarty suiting up for Rostrevor, and state defender Harrison Petty also returning they were expected to give the dominant PAC a close match.

However Fogarty was well held both up forward and through the midfield and seemed to struggle to really display his class during the match which PAC won by 57 points. His bullocking style was on show, but got flipped on him when Mackenzie Slee put Fogarty on his backside with his own ‘don’t argue’. For PAC Lochie Charlton displayed some real explosiveness and speed away from the packs with underagers Kade Chandler and Tom Sparrow really dominating the clearances and hard ball gets.

In the other division one game Sacred Heart, with Charlie Ballard and Jimmy Rowe returning from State duty, dominated St Michaels to win by 102 points at home. Ballard had 12 marks, mostly contested and slotted three goals. Rowe was very busy with plenty of the ball and also kicked five goals.