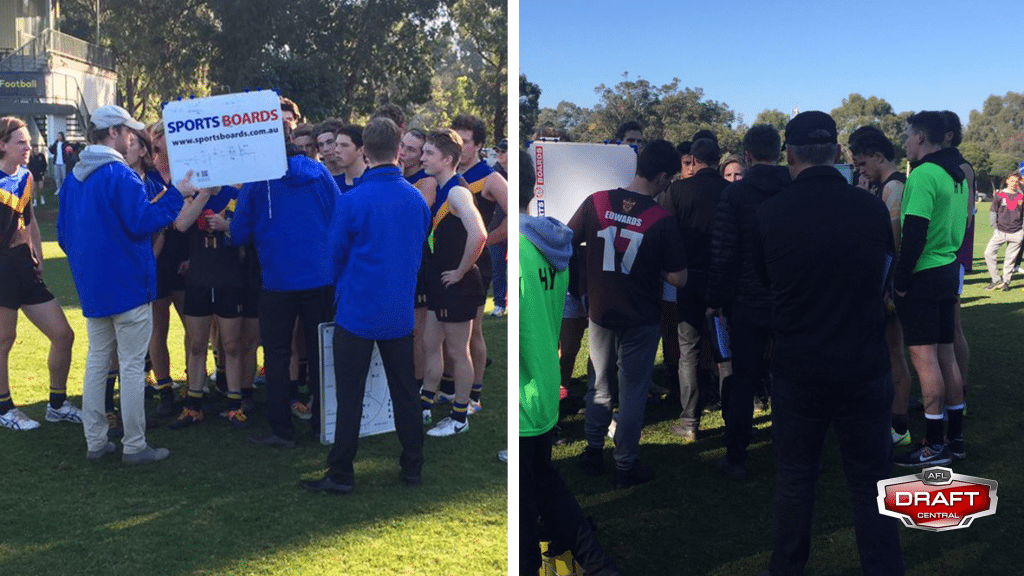 It was a cold but crisp and clear day when venturing to Bulleen to watch the highly-anticipated top of the table clash between Carey Grammar and Haileybury College.

Weaving through luxury European cars and poodle-crosses, lured by the smell of many a charity snag, it clear that the anticipation surrounding the contest had caused a significant crowd to descend on Carey’s main oval and the line-ups did not disappoint. Haileybury’s roll call of talent, from twin twin towers, Ben and Max King, to number one pick contender Luke Davies-Uniacke and defensive duo Charlie Constable and Oscar Clavarino gave them a clear advantage, but the home side – while lacking the household names of their opponents – have taken no prisoners this season and are widely lauded for their evenness and commitment as a team.

By the time the siren sounded to begin the match the crowd had swelled to something approaching VFL levels, and surprisingly, it was the respective student bodies that contributed the least numbers. The crowd was noisy, it was fired up, and it wasn’t to be disappointed. Within minutes Max King, all 200cm of him, had collected the ball at ground level, turned his opponent inside-out and slotted an outrageous major from 40m out deep in the right hand pocket. He followed up with two more in the first quarter despite coming in for some very close attention from his sorely undersized opponents, marking strongly and wowing observers with his breathtaking athleticism and skill for a huge young man.

Davies-Uniacke was doing what he liked in the middle for the Bloods, despite going at barely above a canter, and with Constable’s big rig lining up in midfield and clearing a path for Haileybury’s fleet of runners and Jackson Ross and Sam Loewe slicing across half forward to great effect, Carey was behind the eight ball as the first quarter ended.

.@Haileybury all over @Carey_Grammar at Qtr time 5-3-33 to 0-2-2. A dominant display in all respects from the Bloods. #APSFootball

Carey was never likely to go quietly on their home patch however, and after sharking a disastrous kick out 15m out, Sam Morarty finally put the home side on the board early in the second, and when Karl Wise followed up with a massive bomb from outside the arc, Carey was back in the hunt.

A third goal in a row followed through Lachie Summers and the Carey crowd was well and truly up and about before big Max King was simply too big, too fast and too good again and steadied the Haileybury ship with his fourth.

Carey’s even spread of midfielders was starting to turn the tide, with Davies-Uniacke having little presence in the midfield – copping extra attention at every stoppage and Constable moving back to his preferred half-back position. Carey flyer Oliver Simpson was a classy presence on the grandstand wing and the flaming mop of Ed Richards was visible at the bottom of many contests. As the sun melted off the early frost, the game lifted and the importance of the contest to the two sides hit home when multiple spot fires broke out at the main break as the Bloods went in to the sheds 21 points to the good.

Fair to say there's a fair few hairdos getting around on and off-field that wouldn't have passed muster when I was a lad. #APSFootball pic.twitter.com/QAjKY7gHTJ

Both sides came out willing for the second half, but it was Carey who picked where they had left off and hit the scoreboard first with a lovely running goal to Noah Anderson, and when a truly ugly goal went through from off the shin of Aaron Luber, the home side had cut the margin to nine points and Haileybury was well and truly on the back foot.

The pressure had ramped up considerably and the pressure was telling on everyone. A risky defensive cross-goal pass was cut off by Constable but his normally reliable kicking deserted him and he sprayed his set shot out on the full. Haileybury’s bigger bodies in the middle were starting to force the contest back their way, but in one of the plays of the day a desperate run-down tackle from the pacy Simpson prevented a nearly certain Bloods goal. A flurry of behinds followed as neither side could land a definitive blow before a delightful tap from the boundary stoppage from the Carey big man landed in the arms of a bursting Jack Alexander whose quintessential rover’s goal put the ‘Panthers’ within two points.

The wild celebrations of the Carey army were short lived however as Haileybury little man Cody Weightman slammed through a crumbling goal to put some breathing space between the two sides and a towering grab in the middle of a big pack gave Max King his fifth and an official AFL Draft Central bag for the day.

When the siren rang for the final break, the visitors had absorbed some of Carey’s best hits and were still 17 points to the good.

Constable had moved back full-time to stem the tide as Haileybury battened down to weather the inevitable storm and was playing his best football of the day as an intercepting colossus, but it was the Bloods that were on the attack. Uncharacteristic misses from Ross and Davies-Uniacke were a poor return however and when Dickson ran onto the bobbling ball out the back of the contest his point-blank goal but Carey back to 13 points behind and within striking distance.

Carey was coming like a freight train, and despite a mazy run from Ed Richards ending in a narrow miss, a quick snap from a contest following the defensive clearance had the home side within a goal with little time to play.

In a telling blow for Haileybury however, Jackson Ross, a hard worker across half forward all day, got his just reward and his goal pushed his side back out to a nine-point lead and safety. Bodies flew everywhere in the final seconds of the match, and the crowd were on their feet, but in the end it was the highly-fancied visitors that managed to fall across the line for a hard-fought victory. In the end, it was Haileybury home over a gallant Carey 9.13.67 to 8.10.58. The clear standout on the day was Max King, but a massive wrap has to go to the home side who finished beaten, but unbowed.

APS football at its finest.

SIREN!! @Haileybury gets up over @Carey_Grammar 9-13-67 to 8-10-58 in a gripping game of football. Max King the clear standout #APSFootball