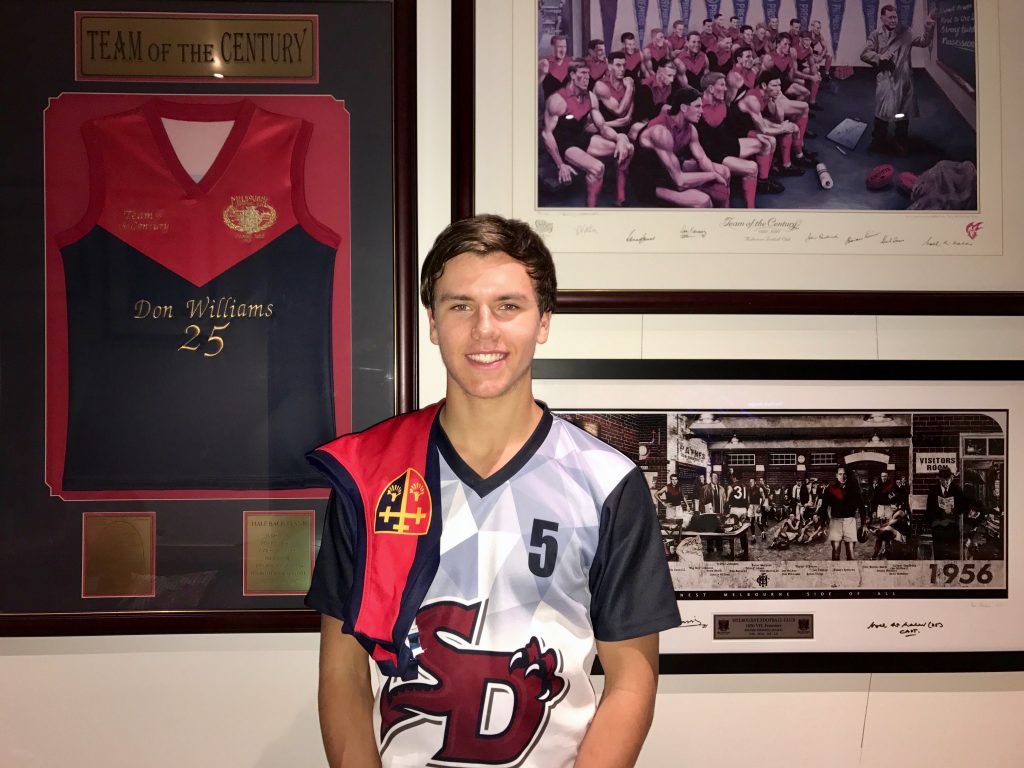 RED and blue has coursed through Seb Williams’ veins since the day he was born. He never met his grandfather Don, who passed away in 1995; but the former Melbourne Football Club Team of the Century member has left a lasting impression on Williams and his family.

Seb Williams has fine pedigree, with Don playing 250 games of VFL and WAFL combined – playing for the Demons in a golden era under Norm Smith, winning five premierships in the 1950s and 60s. Don also represented Victoria on four occasions as a hardnosed athletic half-back flanker.

‘Dashing Don’ as he was known was a brilliant half-back and athlete, promoted to the seniors a year after winning the Thirds Best and Fairest & finishing second in the Morrish Medal.

“Having a grandfather that’s in the Australian Sporting Hall of Fame, Melbourne Hall of Fame and the Team of the Century, I was a Melbourne supporter from the beginning,” Williams said with a chuckle. “I was told from a very young age by family and former Melbourne greats how good he was, and Dad (Brett) use to show me photos of some of his speckies. “Listening to people telling me all this sort of stuff made me want to be like him and it was a shame I never got to meet him.”

The colours red and blue never rubbed off in the Williams household, with Seb schooling at Brighton Grammar School (BGS) – whose traditional colours mirror those of the Demons.

Rewind to Round 10 2016, Williams lined up in the midfield for Brighton alongside future number one draft pick Andrew McGrath, in the pouring rain and torturous conditions out at Haileybury College. Haileybury themselves boasted some of the most talented school boy footballers including 2016 draftees Jack Scrimshaw (Gold Coast – Pick 7), Josh Battle (St Kilda – Pick 39) and with Cameron Polson (Carlton – Pick 59) out injured. Not to mention the highly touted 2017 draftees Luke Davies-Uniacke, Andrew Brayshaw, Charlie Constable and many more – as well as possible top five 2018 draftees in tall twins Max and Ben King, making for a tough slog for the visiting team on one of Melbourne’s worst days in memory.

It was fitting that the title would come down to that day at Keysborough with multiple AFL club recruiters watching to two schools slog out a hard fought five goal to four goal win to Brighton Grammar in the pouring rain and puddles forming around the ground – giving Brighton their third APS premiership in as many years.

As a Year 10 in 2015, Williams the 179cm midfielder had been there before – part of the Vic Metro Under 16 side and involved in Robert Shaw’s second premiership tilt in their undefeated season.

In a dull day in 2016 that saw McGrath push forward and boot two clutch goals, Williams played a major role in rolling up his sleeves and fighting hard to win the vital battle of the midfield, as one of Brighton’s better players on the day.

Williams’ steller 2016 APS season saw him earn a spot in the hounored 2016 APS team for their annual clash against the AGSV – where rarely students who are not in Year 12 are selection and has seen names such as Brighton’s Jayden Hunt, Marcellin’s Brayden Sier and St Kevins’ Oliver Hanrahan push themselves into recruiters thoughts and eventually drafted.

The back half of Williams season was hampered by severe cramping – eventually diagnosed as compartment syndrome putting him out of action for four months in the lead up to TAC Cup finals, frustrating Williams as he watched his teammates at the Sandringham Dragons win the TAC Cup Premiership.

“I felt like I had more to give each game and being physically unable to keep playing made playing very difficult,” Williams explained. “What made it frustrating was that I knew going into each game that I had two and a half to three quarters in me before playing through the pain before being unable to run.”

Williams’ pedigree not only stems from grandfather Don, with mum Barbora representing the Czechoslovakia across Europe in the 1980s, qualifying for World Championships and was the National Champion in the 3000m, 10,000m and cross country events – while father Brett is a Victorian scout for Melbourne Football Club. Remarkably at just 182cm, Don was a junior high, long and triple jump champion of Victoria.

Seb himself represented team Victoria at Nationals in the 800m and 3000m Cross Country events, but due to injury missed his first athletics season that he can remember.

“I grew up doing a lot of athletics (with mum an influence) and went to nationals a couple of times and school boy Cross Country before football became my focus,” Williams said. “Having a background in athletics has helped with football and I’ve found it gives me a bit of an advantage over some of my opponents.”

Intensive surgery was undertook in late 2016 on both calfs, with Williams starting preseason later than some of his teammates at the Dragons and with his school.

“It was difficult starting a couple of months later than everyone else and trying to get up to speed with my skills and also physically,” Williams said.

Williams’ short pre-season did not manage to get in his way when completing his TAC Cup testing, with personal bests for the 20m sprint (2.94s); agility of 8.294s and a standing vertical jump of 75cm – elite numbers by today’s AFL player standards.

Brighton coach Robert Shaw and his peer group appointed Seb as captain of the First XVIII for this season, a school in which many BGS champions have managed to go onto play AFL. No.1 Pick Jack Watts, No.1 Pick Andrew McGrath, No.2 Josh Kelly, No.9 Christian Salem, No.57 Jayden Hunt and Brisbane Lions father-son Josh Clayton all shared a similar story growing up and playing South Metro Junior Football League (SMJFL) at local clubs. For Williams and Salem, Hampton Rovers is the club where they fell in love with the sport tasting in multiple premierships along the way.

At TAC Cup level, Williams has had a strong season for the Sandringham Dragons when not playing school football. Playing as a high half forward, he has averaged 25 disposals (11 contested) and kicked six goals in his four games. At school level is where he has relished in a full time midfield role, leading Shaw’s young team.

In another crunch game against Haileybury College, Williams was one of the best players on the ground in the first half with 14 disposals and a goal – before being concussed in the second term. His game against Geelong Grammar, who boast a quality midfield with likely draftees Paddy Dow, Lochie O’Brien and Brent Daniels – Plus Jye Caldwell in 2018 – Williams had 44 disposals with coach Shaw quipping it was one of the better performances he had seen in his time as coach of the First XVIII. Williams also recorded 40 plus disposals in their thrashing of Wesley and will be looking to finish the remaining three games off well for the season before hopefully another appearance in the APS Rep team to face the AGSV – before aiming to play a part in the Dragons’ back-to-back flag aspirations.

Williams’ injury free season without pain has been one of success and like many aspiring to play at the next level, a focus on enjoying his final year is paramount.

“It was such a shock at first, I couldn’t remember the last time I had been able to run out a game,” Williams declared. “I’m really enjoying my footy so far this season, just trying to focus on having fun.”

If he turns out to be half as good as Old ‘Dashing Don’, he will be a worthy investment.