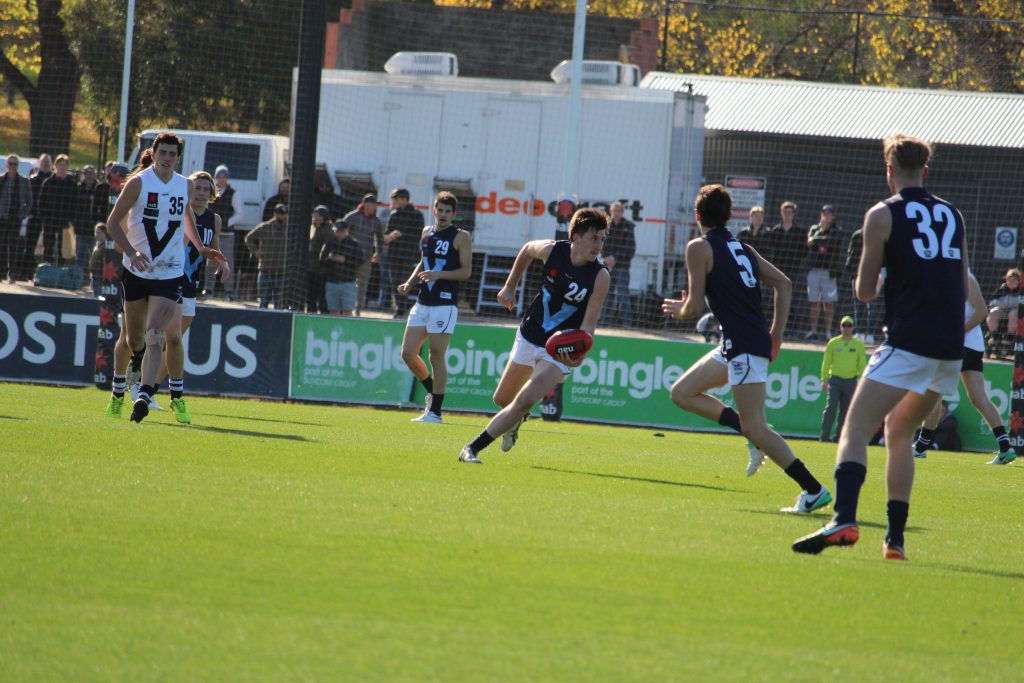 “I want to be a midfielder” declared Vic Metro’s Charlie Constable after their 22-point victory over arch-rivals Vic Country on Saturday.

The talented Sandringham Dragon and Haileybury College student known to his teammates as “Chook” put his name in the spotlight with a game-high 31 disposals, six marks and six inside 50s in the Victorian Under 18 derby at Punt Road Oval.

With the game on the line after Vic Country claimed the lead during the third term, Constable took it upon himself to lift the team – with a third quarter rev-up from coach Martin Allison vital in the win.

“It’s was obviously pleasing to get the win,” Constable said post-game.

“I thought the boys responded well at three quarter time, we were definitely under the pump and to come out and have a really good last quarter it was very pleasing for the rest of the carnival.”

Vic Metro have begun the 2017 NAB AFL Under 18 Championships with two victories and remain as hot contenders to win back-to-back titles.

Constable himself has had plenty on his mind; juggling Year 12 schooling, playing in one of his biggest games of his life for Haileybury College in their ‘APS Grand Final’ clash against Carey Grammar and dealing with being overlooked for Vic Metro selection in their opening clash on June 18 at Domain Stadium against Western Australia, with selection in the Vic derby giving him a chance to showcase his skills.

“Obviously I was disappointed to miss out, but I came out and just tried my best to do a few good things,” Constable said.

Constable’s first game in the Big V saw him play across half forward and through the midfield, looking comfortable with wherever coach Martin Allison deployed him. The pressure of the hot contest didn’t get to the 190cm player, looking clean and composed with ball in hand.

“It was crazy (the pressure), they were telling me leading into the game that I’ll need to be good on my first give and I really noticed that first step up,” Constable said.

“I’ve been playing school footy and it’s just as soon as you get the ball it’s pressure on and you’ve just gotta give it.”

Long term in the AFL, Constable wants to be a midfielder, believing only his endurance is holding him back from slotting there full-time in his 18th year. A modest score of 12.9 on the beep test in TAC Cup screening at the start of the year will be an area of focus as he pushes through his draft year and puts his name in front of recruiters.

“I think if I’m able to get my tank right I think I can be pretty good in the midfield with my first give,” he said.

“But probably at the moment half-back, but I see myself in the future as a midfielder playing across half forward as I did today.”

Last year was a tough one for Constable, missing a large chunk of his bottom-age season through injury and didn’t play in Sandringham Dragons’ grand final victory playing just two games for the season, with the determined midfielder declaring that “a full preseason at Sandy has held him in good stead” in his draft year helping him perform to his best.

The Haileybury College student has been one of their best performed across half-back and has soaked up the knowledge of coach, former Essendon 270-game star Matthew Lloyd. The ‘Bloods’ as they are affectionally known, are yet to be defeated in the APS school boys competition and require a sole win from their remaining two games to sow up the premiership, in what would be their first premiership since 2005.

“His (Lloyd’s) knowledge and just how much he loves the school and the players is phenomenal,” Constable said.

“We’ve learnt a lot from him and Lappa (David Lappage), who have been very good and hopefully we can get the premiership done in a couple of weeks time.”

This season, Constable is averaging 22 disposals (11 contested) and five marks for the Dragons and he will run out again in Vic Metro colours on Friday at 4.40pm against South Australia at Etihad Stadium.