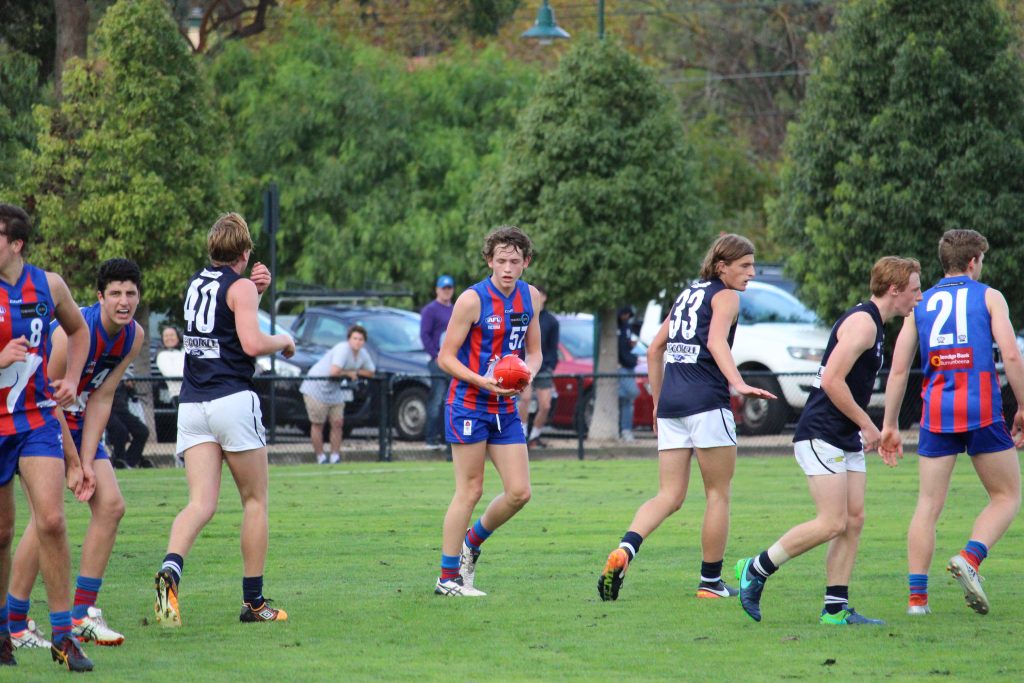 ROUND Eleven of the TAC Cup was completed over the weekend, with TAC Cup ‘Futures Rounds’ continuing. We had scouts watching three of the games – read their notes below.

#2 Geordie Nagle – Won plenty of football in the defensive half of the ground, playing more up the ground at stages in the contest than rather as a pure back pocket. Did make a few errors by foot, but was able to mark and get to the right spots when having to defend.

#5 Seb Williams – Had the ball on a string early across half forward and through the midfield. Often opted for shorter passes by foot – but was smart at times by hand, drawing a player before whipping the ball into the corridor by hand and get the Dragons moving.

#8 Will Walker – Another who found plenty of the ball in the first half. At times was sloppy by foot skewing a few targets up the ground. Quieter after half time but still found a good amount of the footy.

#10 Angus Styles – The Dragons’ best in their strong win. Rebounded the ball well across half back and was good through the contest. Kicking can be hot and cold – but was solid in what was a windy day at Trevor Barker Beach Oval.

#37 Bailey Smith – One that has impressed at school footy for Xavier and shown glimpses in his appearances for the Dragons and Vic Metro U17 Futures. Provides good run & carry getting the ball going forward, with a dash of speed. One to keep an eye on for next year’s draft.

#74 Nathan Murphy – The Victorian cricketer was a late addition to the Dragons squad and had a solid debut in defense after turning heads in the APS school boy competition up forward for Brighton Grammar. Possesses a long kick but at times did overuse the ball by hand coming out of defence. Voice was good in the defensive 50 barking instructions to his teammates despite being a new learner to the Dragons structures.

#7 Harry Benson – Played through the midfield and was solid for the Falcons, often acting as a sweeper at the contest. Found the ball and was able to dispose of it well on his right foot – bar one clanger right near their Falcons’ defensive 50.

#9 Frazer O’Gorman – The left footer played through the midfield and despite his small frame competed well at the contest. He did however have multiple ineffective kicks off his left foot – but was one of the Falcons’ best.

#13 Ethan Floyd – Arguably the Falcons’ best – not wearing his usual red boots but was sporting a fresh lime green pair. Uses it well off his left foot on the outside and a strong player on the wing for the Falcons. Hoping he comes back in for Vic Country this week.

#17 Cooper Stephens – Another who impressive in what was a poor game for the Falcons. Kicked the ball well around the ground, hitting plenty of targets. Thought he was the Falcons’ best behind Floyd.

#4 Ned Reeves – Although the Power tried – the ruck work from Reeves proved hard to match with the Power rotating their ruckman to no avail. He was a tough one to beat in the air, being a popular target through the midfield and demonstrated a keen eye for passing & smothering.

#6 Matthew Day – Day was a nightmare for the Gippsland midfield this weekend, booming through any chance he got. He racked up three goals for himself and was pivotal in setting up a few more for his team. His sharp kicking was key to the Charger’s efficient four quarters and his movement with the footy makes for some exciting plays.

#7 Charlie Thompson – Launching through the first goal of the game, Thompson set a pace for the game his opposition would struggle to keep up with. His movement through the midfield aided many of his teammates’ scoring. He has a keen awareness of his surrounding shown through his ability to run and carry, shrug off his opponents and lay heavy tackles. The work rate of this youngster would not be easy to match.

#8 Toby Wooller – Wooller came out hot in the second half, ending his game with five goals under his belt. The ball always managed to find his strong hands, and whenever it was thrown to his boot, it hit the best option he could find. A powerhouse for the Chargers, Wooller destroyed the Power defence, slotting through plenty of goals and assisting in many others. The youngster also had no issue stepping up as ruck and showed off a beautiful smother in the final minutes off the game.

#37 Ed Michelmore – The work ethic from this young man helped keep Power goalless in the second half. A smart footballer, this young man excelled in the midfield. His movement was quick, sharp and calculated, displaying an outstanding sense for delivering that footy. He shrugged off two tackles running through the midfield, tossing his opponents into the pitch. Michelmore was exciting and dangerous for the Chargers.

#57 Riley Collier-Dawkins – Dawkins’ two goals were an impressive feat, but the work to be noted is his presence in the midfield. Having no problem getting his own ball, he was present during most of the major transitions through the Charger’s midfield. Athletic and intelligent, Dawkins showed us this weekend why he is the perfect football. His run and carry through the midfield is powerful, and his passing sharp and clever. This man deserves some attention for his efforts shown today and is one to keep an eye on for the 2018 AFL Draft.

#4 Changkuoth Jiath – Jiath has an athletic and adaptable future with his efforts today helping to reinforce these beliefs. CJ stepped up to the ruck at the beginning of the third, and despite being much shorter than his opponent, leapt to a height that made him Reeves best opponent for the day. A quick and agile footballer, Jiath was often the first to the ball and was up higher than the rest when it came to pack marks. His smart passing saw the footy reach his forward half, and his intercept in the second half was a sight to behold.

#19 Callum Porter – Despite being on the losing team, Porter was without a doubt one of the best on ground. Even with victory seeming more and more impossible, the young gun refused to give up the fight. His defensive pressure kept the Chargers out of his neck of the woods early on, and his work through the midfield comes with plenty of class and finish. Making the most of what he has, this youngster made the game appear a lot better than the end result may suggest.

#29 Boadie Motton – Working to the bone for his team, Boadie’s defensive pressure and placement of the ball made galloping off a bit harder for the Chargers in the opening half. His first quarter really showed off his talents with his clever movement in the midfield. He hits up his target, runs with excellent carry and refused to break under the pressure of a more adept side.

#1 Brad Bernacki – Like salt and pepper, Brad Bernacki was everywhere for the Cannons today. The tough inside midfielder led his team from the front and continues to prove himself despite not being selected by Vic Metro. Today was a classic Bernacki performance; contested possessions, strong tackling and two crucial goals from midfield.

#5 Curtis Taylor – Demonstrated plenty of X-Factor today in the forward half by kicking three goals and setting up a couple more. His craft and agility allowed him to bring his teammates into the game and the forward won several one-on-one contests.

#19 Ben Caluzzi – Caluzzi really impressed today via his run and carry off half back. The defender accumulated disposals as the Cannons’ main delivery man and was prominent throughout the whole match. He kicked an incredibly skilful goal from the boundary line from outside fifty which also caught the eye. If there was one criticism of his performances, he did occasionally turn the ball over, but more than made up for this with a terrific performance.

#26 Mason Fletcher – Fletcher acted as the rock in defence again today. The bottom-ager reads the flight of the ball better than his opponents and even snuck forward to kick a cheeky goal in the last quarter. Somehow I don’t think we will be seeing him kicking too many more goals in the competition because of his value in the defensive half.

#30 Mitchell Podhajski – Podhajski mimicked Noah Balta’s role (against the Knights) for the Cannons today and was one of the best players on the ground today. The swingman kicked a terrific goal and took several strong contested marks, including multiple intercept possessions in defence. He displayed a long penetrating kick and composure when he had the ball.

#48 Liam Middleton – Middleton showed himself to be a tidy footballer in today’s performance. He didn’t amass a huge amount of ball but was clean and impactful when he got it.

#7 Matt Harvey – Harvey was one of the Pioneers best today in what was a commanding four quarter performance. He was the first player for his team at the bottom of the pack and showed an outstanding thirst for contested ball. His kicking was effective and fought bravely in the midfield all day.

#15 Darby Henderson – Henderson was also in the best few for his team as he collected lots of possessions by pushing up the ground. His performance was highlighted by his kicking inside fifty as he was able to hit targets and didn’t waste any of his possessions.

#16 Jacob Atley – Atley’s first five metres off the mark is explosive and he provided run & dash out of the backline.

#18 Bailey Henderson – Started the match off slowly but eased into the contest and found a lot of ball on a wing. His uncontested game set up the Pioneers forays forward and like his namesake delivered the well inside fifty.

#19 Mitchell Kemp – Kemp fought bravely in a tough day for the Bendigo defenders and was probably the pick of his back six. He displayed an ability to read the ball and take intercept marks and spoiled well in one on one duels.

#31 Caleb Sheahan – Made the most of his return to the team by demonstrating aerial prowess for a midfielder and physicality around the ball. He didn’t collect the numbers of Bernacki or Harvey but impressed none the less.

#35 Jobee Warde – Won the majority of hitouts today and allowed his midfielders to get first use via many hit outs to advantage.

#69 Austin Mertz – His speed on the lead was impressive and worked hard to present as the Pioneers’ main tall forward. Mertz displayed athleticism and strong hands and was the only multiple goal kicker for his team.

#70 Angus Byrne – Byrne was the surprise packet of the day. His intensity and tackling around the ball for a tall player was outstanding and he coupled this with strong overhead marking. The big man possesses a piercing left foot kick and always presented for his teammates. He kicked one goal but imposed himself with his big frame around the ground.