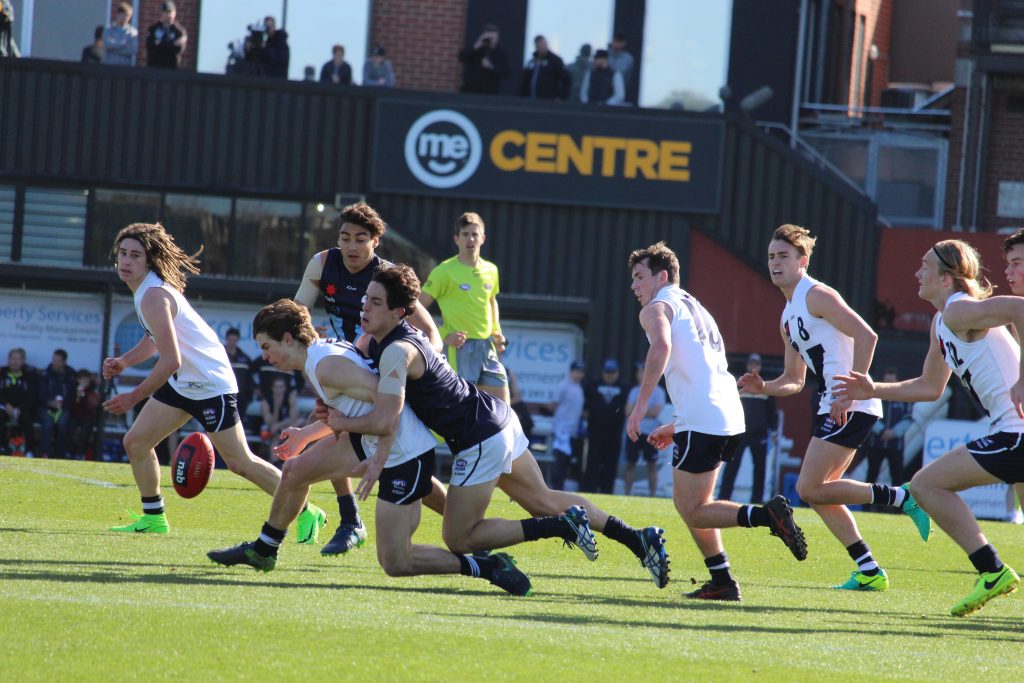 VIC METRO continued their undefeated start to the NAB AFL Under 18 Championships with a 22-point win over Vic Country on Saturday. Led by midfielders Charlie Constable and Cameron Rayner, as well as Richmond father-son prospect Patrick Naish, Vic Metro were too good for their rivals in front of a healthy crowd at Punt Road Oval.

#1 Dylan Moore – Super in the midfield for the second week in a row. Kicked a great goal out of the pack towards the south end and possess a very good clean pick up from ground level. Finds a good chunk of the ball for a player of his size and uses his smarts around the ground. His pinpoint pass to Lachlan Fogarty in the third quarter was exceptional.

#2 Jack Higgins – Yet again found the ball in the midfield. His quick hands in traffic are outstanding, as soon as he picks up the ball he dishes it off to a teammate. Hit Max King with a great pinpoint pass early in the game. Kicked a superb goal in the third quarter and celebrated to the crowd!

#4 Lachlan Fogarty – Good to see him return from injury with a strong performance. Had a great passage in the final quarter, running down a Country player with a strong tackle to win a free kick. Hit the scoreboard with two goals and laid 12 tackles. Used it well on his right foot in traffic playing across half forward and pushing into the midfield.

#5 Patrick Naish – Played one of his better games for the season. Won the football across half back and was able to push forward and snag two goals. Is an outside player and while his kicking can be hot and cold – he hit most of his targets today. Is very smart around the ball.

#19 Cameron Rayner – Was one of Metro’s best in the opening half but impact lessened as the day went. Showed off with some huge kicks on his left foot (non-prefered) and booted the opening goal for Metro (finishing with three goals in the opening half). Rayner often picked up the ball, burst away with his speed and used a fend off to his advantage. One time he came unstuck trying to do too much and take on his opponent slowing down to fend off – before being tackled. Overall a very good game, but it’d be great to see him put together a four quarter game.

#24 Charlie Constable – Vic Metro’s best with 30 disposals. Played more of a role in the forward half of the ground – rather than in the defensive half as he has done so far this season. Was the cleanest player out there, rarely fumbling and was a pure ball magnet. Missed a few kicks early but got better as the game went on. One who showed why some rate him as a first round prospect.

#31 Will Sutherland – Crashed packs up forward and was a solid performer in his first appearance outside school footy. Laid a nice tackle on the wing early in the contest, as well clunking a mark up forward and booting a goal in the opening quarter. Hopefully can build into a big game next week against South Australia.

#4 Gryan Miers – One of Vic Country’s best winning the ball in the front half. Kicked a superb goal on a sharp angle and when he was near the ball something always looked like happening. Finished with two goals from his 24 disposals and was an important player, with his agility on show. At times his kicking technique can lead to the ball missing the target – but was mostly good today.

#8 Lochie O’Brien – A slow starter, but worked into the game after half time. His run on the wing in the third quarter was important in getting Country back into the game. Used it reasonably well on his left foot.

#9 Luke Davies-Uniacke – Stop the game after two minutes into the second quarter and Davies-Uniacke was arguably the best player for Vic Country (with nine disposals at that point). The opening quarter saw him solid enough to stay upright and dispose of the ball despite a few Metro players clinking on to him. The highlight was his burst out of the middle at the start of the second quarter, running and booting the goal from 50m out. Quiet after HT, finishing with 14 disposals.

#15 Paddy Dow – Will likely fly under the radar as not one of their bigger disposal winners, but set up multiple goals thanks to his good work at the contest. His stoppage work was good, getting the ball out by hand. His speed is electric and was able to burst out of the stoppage on multiple occassions.

#19 Matthew Ling – Rebounded it well on the outside when he had the chance to. Possesses good agility and moves well around the ground. Often he can get caught out due to not possessing a right foot kick and having to swing back onto his left or kick it wide so his left foot can find a target.

#21 Hunter Clark – Was disappointed to see him mostly spend the day in defence, where I’ve liked his work on the inside for Vic Country. Again his kicking let him down at certain stages coming out of defensive 50 missing a few targets that he should’ve hit. Went in hard when he needed to and his run & carry was good. Hopefully more cleaner by foot in Country’s last two games.

#28 James Worpel – One of the cleaner performances by foot that I’ve seen him play. Was a fast starter in the opening term and there wasn’t any ‘bombing’ long forward kicks without thought that he has been known to do in the past, looking somewhat composed going forward. Tackled with venom and wasn’t afraid to get into Cameron Rayner and Jack Higgins through the contest. A very good ball winner – one of his better games this season.

#5 Jack Mahony (Vic Metro U16s) – Played as an inside midfielder and won multiple clearances. Is very agile in the midfield and has been a star for St Kevin’s College at school football.

#29 Emerson Jeka (Vic Metro U16s) – Looks ready to go and is very solidly built. Played up forward and boots the ball long on his right foot. Very strong and is one to keep an eye on.

#10 Leo Connelly (Vic Country U16s) – Nearly kicked a ripping goal in front of the crowd in the second quarter, but showed some good signs when up forward. One to circle and watch over the Under 16 championships.

#18 Hayden Young (Vic Country U16s) – One of the leading contenders for a high selection in 2019. Reads the play outstandingly well and his rebound from defence was very good. Capable mark overhead and should get better as the carnival goes.