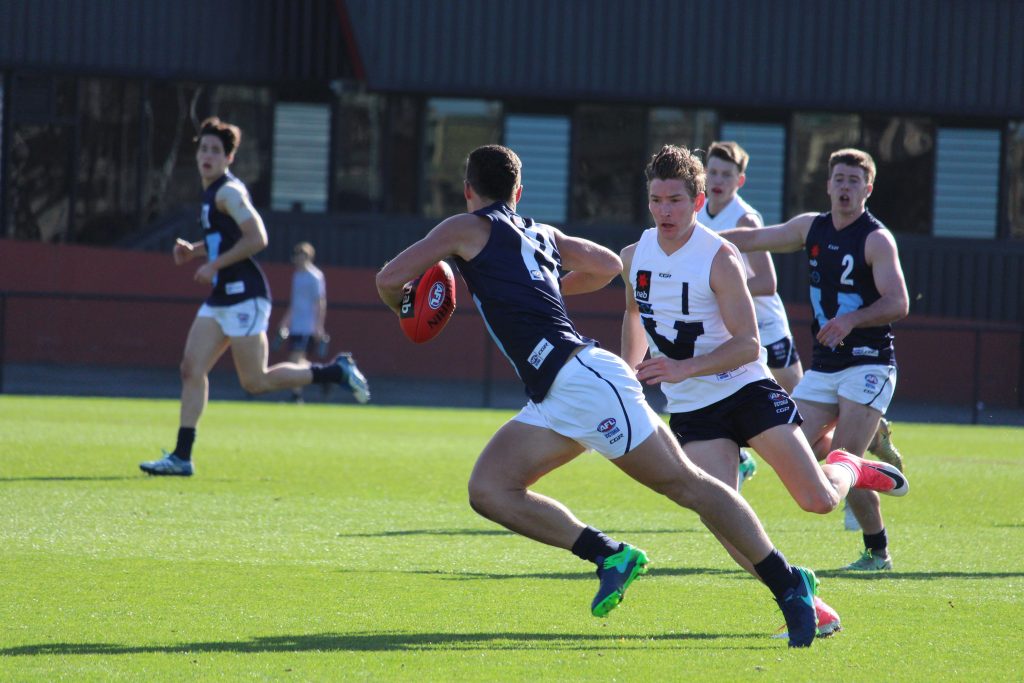 The Vic Metro midfielder was strong from the opening bounce finishing with 21 disposals in Vic Metro’s 22-point victory.

Rayner bagged three first half goals helping Metro out to a 11-point lead before Country fought back and were able to level the scores in the third term.

Led by captain Joel Garner (24 disposals) in the second half, Vic Metro were far too strong for Country – able to execute their skills on the outside.

Rayner was prominent in the AFL Academy’s 20th year celebration game at the MCG and has carried his form into the Under 18 Championships, winning the ball in the midfield and pushing forward using his strength – often throwing out a ‘don’t argue’ to his opponents.

Richmond father-son Patrick Naish (24 disposal & nine marks) showed his dash across half back in one of his better games for the season. Naish was also able to push forward and booted two goals.

After being left out of Metro’s opening game, Charlie Constable was superb with a match-high 31 disposals and six inside 50s, in a role across half forward and through the midfield.

In what was a game filled with fumbles, Constable was clean with ball in hand in the hot contest.

Lachlan Fogarty returned from injury, booting two goals across half forward, laying 12 tackles at the contest, to finish with 24 disposals.

It was the battle of inside midfielders at the contest, with Vic Country’s Luke Davies-Uniacke, James Worpel and Paddy Dow battling hard against Metro’s Dylan Moore, Jack Higgins and Adam Cerra.

Worpel’s ferocious tackling was on show, laying a team high 10 tackles – making it 21 tackles for the Under 18 Championships so far. Worpel had 25 disposals and was Country’s most consistent for the day.

Davies-Uniacke showed why he is a candidate for the no.1 pick, with his strength at the stoppages enabling him to dispose of the ball whilst being tackled.

His goal at the start of the second quarter saw him burst from the centre bounce, running forward and slotting to goal from outside 50.

Paddy Dow started multiple scoring chains, with his good work in at the stoppages – showing his burst of speed to get the ball moving forward.

Dylan Moore again found plenty of the ball in the Metro midfield, spreading well pushing his name into the eyes of recruiters.

Jack Higgins‘ ball winning continued, racking up 30 disposals in the midfield. Higgins booted a fantastic goal close to the pocket and celebrated truly infront of the large crowd that congregated in front of the food stalls at Punt Road.

Adam Cerra’s pinpoint pass in the opening quarter was a highlight and his work around the ground was very good.

Scotch’s Will Sutherland showed why he will be a high selection should football come first over cricket, with multiple marks in the forward half and was willing to crash the packs. Sutherland marked truly close to goal in the opening quarter and converted the chance.

.@WesternJetsFC midfielder Cameron Rayner booted this goal in the second quarter – He has 12 disp & 3 gls to HT. #AFLDraft pic.twitter.com/wOTrjGtRmm

Country midfielder Lochie O’Brien was lifted his output after half time, with 18 disposals running hard on the wing in the second half. His dash on the outside was a reason that Country were able to remain in the contest – but they were outclassed by the better skilled team on the day.

Both teams will converge at Etihad Stadium on Friday, with Vic Country playing Western Australia at 2.10pm, while the undefeated Vic Metro team plays South Australia at 4.40pm.