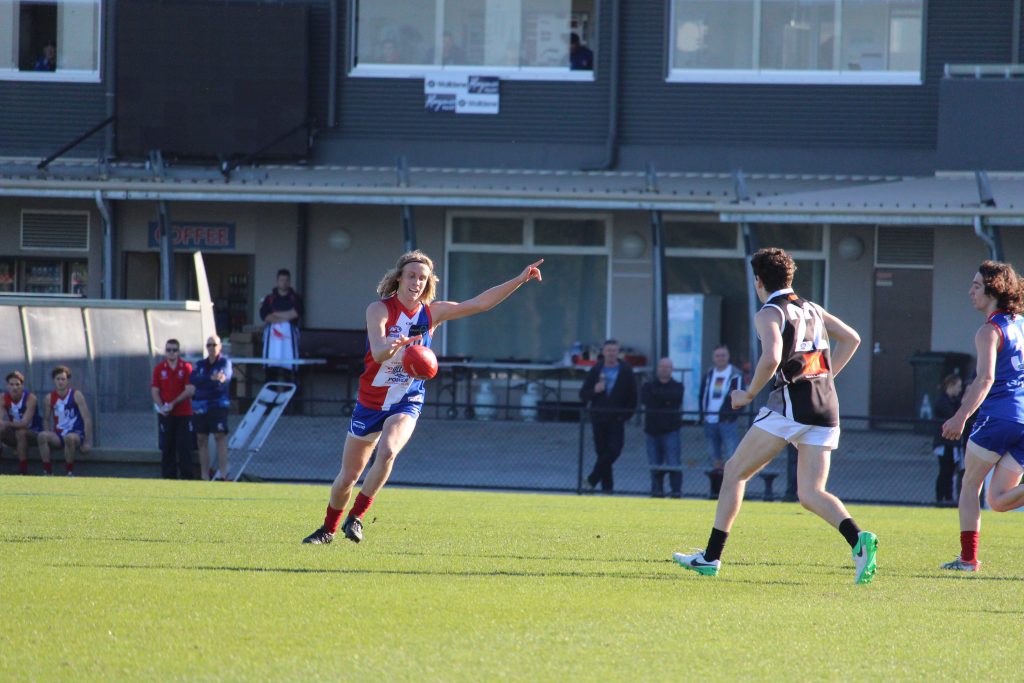 A COMBINED 78 disposals, 16 marks, 12 clearances, 16 inside 50s and two goals to Geelong Falcons pair James Worpel and Cassidy Parish sunk the Bendigo Pioneers to bounce back from the Falcons’ only loss of the season.

The Falcons proved too good for the Pioneers, who were missing a number of key players due to representative duties through the Allies and school football. They battled hard but ultimately could not match the ladder leading Falcons, going down 11.21 (87) to 3.9 (27).

For the Pioneers, regular ball winner Darby Henderson racked up 28 disposals, five marks and four clearances, while Laine Fitzgerald and Angus Schumacher both finished with 27 disposals.

Other Dragons that stood out were Quintin Montanaro who had 33 disposals, seven marks and three clearances, Geordie Nagle with 29 disposals, eight marks and seven clearances, and Will Walker who went at an impressive 86 per cent efficiency for his 22 disposals, as well as six marks, four clearances and two goals.

For the Cannons, Brad Bernacki continued his big month with another 30 disposal game at 87 per cent efficiency, while Lucas Cavallaro had 21 disposals and eight marks and Ben Caluzzi finished with 23 disposals (74 per cent efficiency), five marks, eight inside 50s and a goal.

Dandenong survived an almighty scare against Murray to post an important two-point win. The Stingrays led by 27 points at the final break, but a five goals to one term saw the Bushrangers storm home, only to fall short 14.9 (93) to 14.7 (91).

Bailey Morrish was impressive around the ground with 20 disposals (80 per cent efficiency), five marks, six inside 50s, four rebounds, four tackles and a goal. Other Stingrays that stood out were Riley D’Arcy who booted six goals from 16 disposals and five marks, and midfield pair Tom Murphy and Mitch Cotter who had 23 disposals each and racked up a combined 18 tackles, eight clearances, seven inside 50s and four rebounds.

Western Jets moved a win closer to the top eight with a 33-point victory over Eastern Ranges. The Jets had a strong start to lead by five goals at half-time and while the Ranges hit back in the third term, the Jets steadied in the fourth quarter to win 11.15 (81) to 6.12 (48).

For Eastern, Thomas North continued his leather poisoning for season 2017 with 37 disposals, seven marks, six clearances and six inside 50s, while partner in crime Jordan Lynch had 20 disposals, five marks, 10 tackles and booted a goal. Cody Hirst laid 11 tackles to go with his 20 disposals and five marks.

Over at Casey Fields, Callum Porter backed up his huge effort in the last round to have another best on ground performance against the Greater Western Victoria Rebels. Porter had 31 disposals, six marks, 11 clearances, nine inside 50s, eight tackles and two goals to lead from the front for the Gippsland Power who knocked off the Rebels by 27 points. Trailing by a point at the final break, the Power booted six goals to two in the final quarter to run over the top of the Rebels, having finished with eight of the last 10 goals to win 15.14 (104) to 12.5 (77).

Acting captain Will Stephenson stood up at clutch moments, having 20 disposals (75 per cent efficiency, five marks, five clearances, four inside 50s and four goals, while Kim Drew had 20 disposals, six marks, five tackles, four inside 50s and four rebounds. Up forward, Kyle Reid was a target, booting four goals from seven shots and his game included 18 disposals and six marks.

For the Rebels, Aiden Domic was the clear standout with 26 disposals, five marks and a goal, while Naish McRoberts (23 disposals) and Trent Reed (20 disposals and eight clearances) worked hard around the stoppages. Lloyd Meek was prominent in the ruck with 28 hitouts and 15 disposals.

In the other game of the round, Oakleigh Chargers got the points against Northern Knights in a thumping 83-point victory. The Chargers never looked like losing and played a consistent four quarters in the 16.13 (109) to 4.2 (26) victory.

Lachlan Bugeja had 24 disposals, seven clearances, six tackles, five inside 50s and two rebounds, while James Troani was busy in the forward half with 21 disposals, 12 marks, four inside 50s and a goal. Matthew Day was also prominent with 24 disposals, three marks, two goals and eight tackles, while Daniel Stanford had seven marks (three contested) and booted four goals from 16 disposals.

For the Knights, Marcus Lentini had 34 disposals and six marks, while Mitchell Andrews racked up another 30 touches, seven marks and six rebounds. Jamison Shea (23 disposals, eight marks and a goal), and Lane Sinclair (21 disposals, four marks and four rebounds) were also among the bigger ball winners.

After 10 rounds, Geelong Falcons sits four points clear on top ahead of Oakleigh Chargers and Murray Bushrangers. Sandringham Dragons and Dandenong Stingrays sit four points behind with Northern Knights (20 points) outright sixth ahead of Gippsland Power and Eastern Ranges in seventh and eighth. Greater Western Victoria Rebels, Western Jets and Bendigo Pioneers are ready to pounce outside the eight on 12 points, while Calder Cannons are holding up the ladder with eight points.