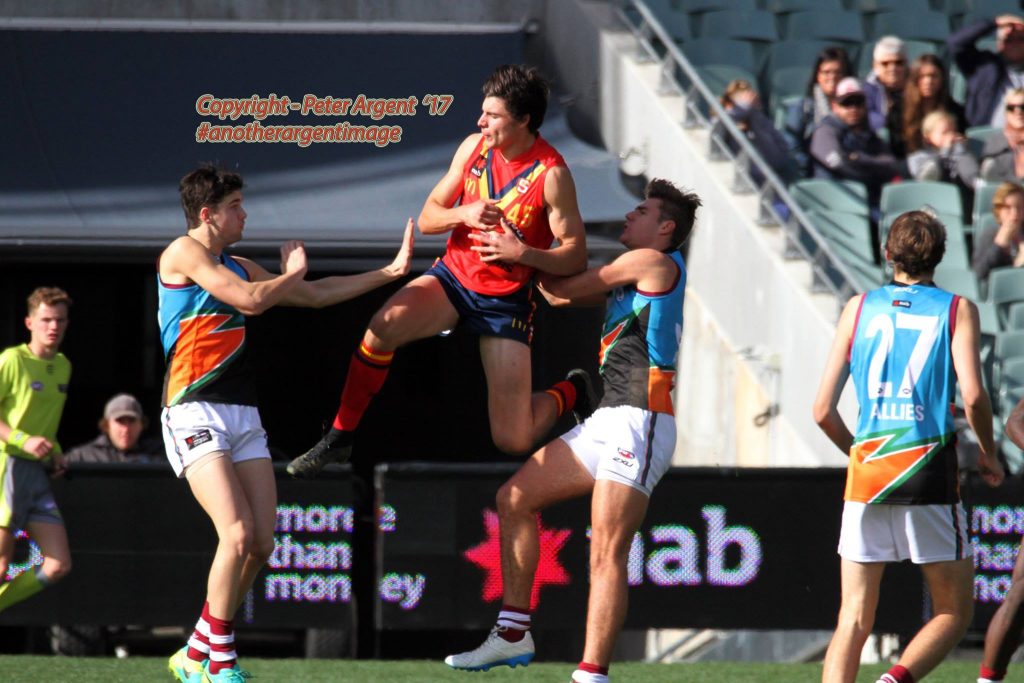 South Australia claimed their opening win of the NAB AFL Under 18 Championships with a 51-point win over the Allies on Saturday. Led by bottom-agers Jack Lukosius and Jackson Hately, the Croweaters kicked away in the third term with six goals to none to put the result beyond doubt.

#2 Izak Rankine – One of SA’s bottom-agers and arguably the most exciting of the lot. Not a high production player (15 disposals today), but whenever he got it, something good happened. Showed great speed with a run down tackle on the wing. Is freakishly talented and will feature highly next year.

#3 James Rowe – He’s only 172cm but the son of Stephen displayed some AFL relevant traits today. I liked his footy smarts and awareness whilst being tackled and his disposal by hand, particularly in tight caught the eye. Pushed up into the midfield in the second quarter and found it easily.

#16 Mitch Crowden – After being arguably best on ground last week, Crowden started on the bench and spent a fair bit of time up forward, as well as some cameos in the middle. Took a number of contested marks, and displayed great defensive pressure on a number of occasions including a high speed chase & tackle through the middle that resulted in a turnover and goal. His kicking as usual was highly effective including 4 inside 50s that were deadly.

#17 Brad McCarthy – Thought the strong bodied small defender was one of their best. Was particularly clean below his knees in the second half and foot skills were pretty good. Will be one to look out for in the coming weeks as he has shown promise as a lockdown backman and also in attack. Finished the game with 22 disposals and 7 rebound 50s as well.

#20 Jackson Hately – Was fantastic all day for SA, collecting 27 disposals as a 16-year old. Generally used it well by foot too. Played predominantly on the outside, complementing the handful of strong inside mids. Can see why he was selected as an AFL Academy level one member.

#33 Hugo Barry – In his first game for SA this campaign, Barry started off down back and took a couple of contested defensive marks, and knew when to peel off his player to help out a team mate. Also pushed forward and got his hands to a number of contests and snagged a couple of goals, his agility for a big man is dangerous as his ability to keep his feet. However with a one minute to go, Barry hurt his knee as a result of a marking contest and left the field on a stretcher.

#36 Jack Lukosius – Played forward all day, opposed to Brander for much of it and won that battle pretty comfortably. His work rate was excellent, often presenting up outside of the 50 on the lead. Still slightly built but once he gains a few kilos he will make a very good centre half forward. Foot skills were neat apart from one set-shot miss directly in front. Managed to slot through three majors nevertheless.

#37 Charlie Ballard – Played mainly on the wing with some time also spent up forward. Provided good link play, won contested ball and showed some forward pressure. Memorable moment was a chase down on the wing, made the tackle, kept his feet to recover the loose ball, then delivered with a nice 30m stab pass.

#40 Darcy Fogarty – As was the case last week, the highly touted utility did not find heaps of the ball, finishing with 14 disposals, but made an impact at every contest he attended. You can really feel Fogarty’s presence whenever he’s around the ball. Played forward in the first quarter but moved into the middle as the game went on and did some good things. Did notice he bit off more than he could chew on a couple of occasions.

#49 Callum Coleman-Jones – The skipper was perhaps the most influential player on the ground. Won his fair share of hit outs, finishing with 15, but it was Coleman-Jones’ work around the ground that stood out. As usual he clunked some big marks and collected an impressive 28 touches. As has been alluded to, his kicking action looks awkward and will probably be altered at the next level. Sprayed one out on the full in the first, but was a really good game from CCJ today. Has done enough to suggest he could be drafted in the first couple of rounds come November.

#5 Zac Bailey – Bailey played mainly through the midfield, Bailey displayed his explosive clearance work on a number of occasions, but his goal kicking boots must have been at home as he could easily have kicked eight goals. The play of the day was a centre ball clearance at pace, driving hard through 50 with a shot on goal. Did seem to drift at times against the rotating SA midfield but was leading possession winner for the Allies

#10 James Bell – When he managed to get his hands on it, Bell’s pace made him exciting to watch. Found his game similar to Rankine in that he made things happen. Just the 10 touches but was good to see him lay eight tackles. Kicked a goal as well and looks to be the Sydney Swans academy best prospect this year.

#13 Bailey Scott – Coming into the side this week, I really liked the game of bottom-ager Bailey Scott. Kicked two goals in the final term and finished up with 14 disposals, 5 marks, 2 tackles, 7 inside-50’s as well. I’m sure Geelong and North Melbourne will also be looking to secure his services next year through the father-son rule.

#33 Jarrod Brander – Played the first three quarters at centre half back where he had the match up on Lukosius but was beaten. Having said that, he didn’t do a lot wrong when in possession. Had the responsibility of kick in duties down back but was swung forward in the final quarter and made an impact straight away.

#38 Connor Ballenden – Being at the ground, it felt as though the Brisbane Lions academy player was largely ineffective. As usual, Ballenden spent time up forward but also in the ruck where he amassed 18 hit-outs. Not sure where he plays his best footy but Coleman-Jones had the upper hand around the ground.