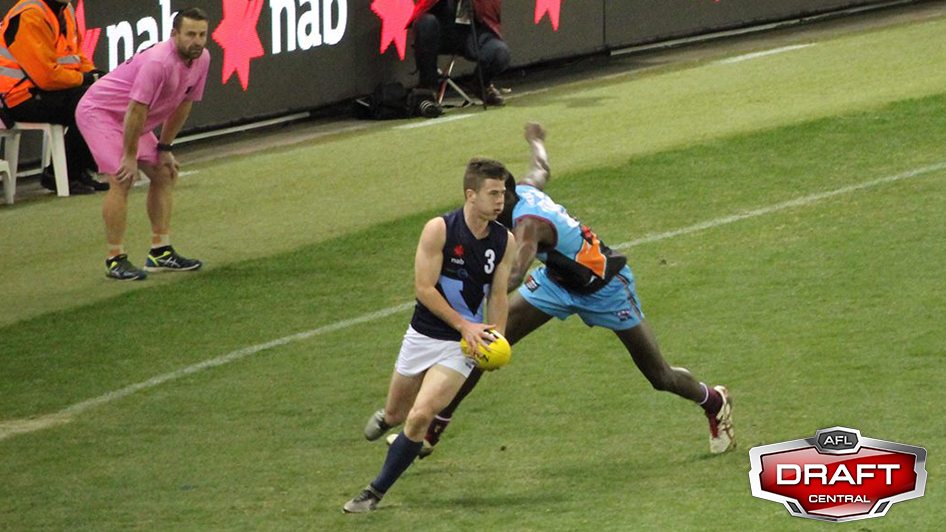 The 178cm Oakleigh Chargers product was dominant from the first bounce using his clean hands in at the stoppages and finding targets around the ground by foot, on his way to collecting 30 disposals, nine marks, seven clearances and two goals in a best on ground display.

Higgins represented Vic Metro in two games last year as a bottom-ager averaging 20 disposals and his impact in the first half having 22 disposals, was the reason Vic Metro were able to win their opening game of the NAB AFL Under 18 Championships.

Midfielder Adam Cerra (24 disposals) was a standout in the midfield alongside Higgins, not doing his possible top five selection chances any harm.

Eastern Ranges midfielders Dylan Moore and Trent Mynott recently combined for 65 disposals, 20 tackles, 19 clearances and 10 inside 50s in the Ranges’ Round six win against Gippsland Power and the pair were impressive against WA.

Moore showed off his dash collecting 30 disposals and kicking a goal, while Mynott (21 disposals) used his strong frame to win it on the inside starting the game strongly for Metro.

Possible no.1 pick Cameron Rayner showed his power in the forward half of the ground, finishing the day with 23 disposals, six clearances and a goal.

Northern Knights pair Patrick Naish (22 disposals) and Nicholas Coffield (19 disposal) were others than impressed through the midfield and are two likely to push for first round draft selection.

Up forward, Sandringham Dragons captain Hayden McLean bagged two goals showing no signs of a recent injury sustained in their loss to the Ranges.

After a close opening quarter that saw two goals kicked apiece, Metro opened the game up with their superior skill setting them apart from WA.

Metro booted four goals to two and at three quarter time the margin of 32 points wasn’t out of WAs reach – after leading by 30 points in last weekends game against South Australia before a last quarter fade out nearly cost them the match.

However it was goal for goal for most of the final term with East Perth’s Louis Miller booting a long goal from outside 50m, one of the highlights for the home side.

Tom Joyce again found over 20 disposals playing through the midfield for Western Australia. The bottom-ager has been one of their standouts so far in the Under 18 Championships and would be one of the leading contenders for their MVP.

Midfielder Callan England (17 disposals) used his speed on the outside and was one of WAs best after collecting 18 disposals in their win against South Australia.

AFL Academy member Jake Patmore was strong with 19 disposals, while Ian Hill again caught the eye with his dashes up and down the ground.

Key forward Oscar Allen booted three goals, but played a lone hand with little support from WAs talls inside 50, while at the other end of the ground Allen’s co-captain Aaron Naughton had 15 disposals and six rebound 50s.

Next Saturday will see Vic Metro face off against arch-rivals Vic Country at Punt Road, while Western Australia will have their third consecutive home game facing the winless Allies on Sunday at Leederville Oval.