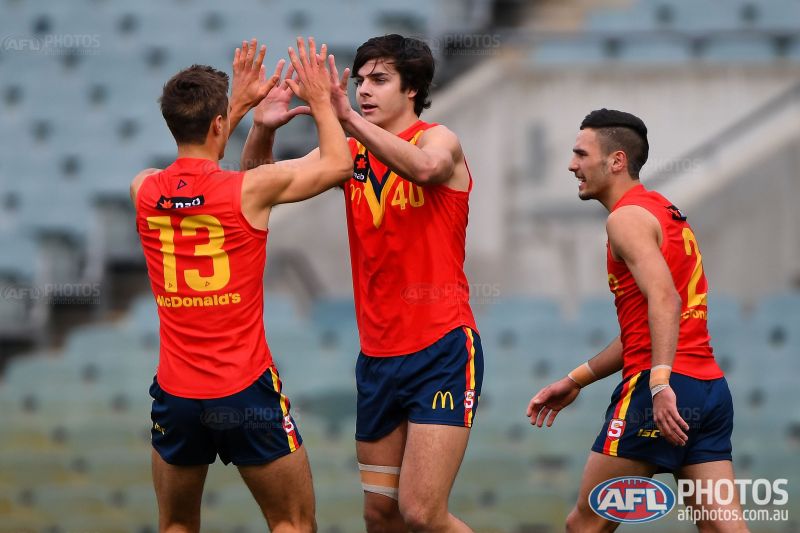 SOUTH Australian bottom agers Jack Lukosius and Jackson Hately have starred in the Croweaters 51-point win over the Allies at Adelaide Oval on Saturday.

The pair were consistent players right throughout the contest and ensured SA would collect their opening win of the NAB AFL Under 18 Championships in their only home game of the carnival.

South Australia led at half time by a solitary point, but managed to boot six goals to none in the third term putting the result beyond doubt.

Possible 2018 no.1 pick Jack Lukosius showed his talent up forward, with three marks in the opening 10 minutes of the game.

The talented 16-year-old finished with three goals and clubs will be licking their lips at the highly touted prospect for next year’s draft.

Fellow AFL Academy Level One member Jackson Hately had 27 disposals, winning it through the midfield helping South Australia push the ball inside 50.

Izak Rankine (15 disposals) was not only exciting around the ground, but his celebrations after his two goals left a lasting impressive. The bottom ager possess elite speed and agility, and certainly caught the eye of club recruiters watching on in the sunshine.

Sturt’s 185cm Jordan Houlahan booted a game-high four goals and was one of their man targets inside 50, clunking three marks.

Giro played a great role in the midfield using it well off his left foot, winning the clearances and getting the ball forward for South Australia.

In the ruck, Callum Coleman-Jones stood out with 15 hit outs and 28 disposals, working hard around the ground.

His contested marking was again on show early in the game and was a reason that they were able to get back into the game in their narrow loss against Western Australia last week.

Adelaide father-son Jackson Edwards was good in the contest through the midfield collecting 22 disposals and six clearances.

Possible no.1 pick Darcy Fogarty showed glimpses finishing with 14 disposals, starting at the centre bounce in the second quarter and hunting down an Allies opponent to lay a crunching tackle. Fogarty also attempted a ‘screamer’ in the second quarter, with the ball narrowly slipping from his grip.

His two goals from just inside 50 were outstanding and the Glenelg product will be hoping to build on his glimpses and put them into a all-round strong performance in their round four clash against Vic Metro.

For the second week in a row, GWS Giants academy member Nicholas Shipley was the Allies’ leading disposal winner with 22 disposals, using it well by hand.

Zac Bailey used his speed from the stoppages to take the ball inside 50 on five occassions. Bailey finished with 22 disposals, willing to tackle hard around the ground.

Jarrod Brander started the day in defence, but was moved forward late in the game, booting a goal in the final quarter.

Brander finished with 15 disposals in what was a reasonable game for the possible top five selection.

Bailey Scott (14 disposals) was impressive in the final term booting two goals to give the Allies a sniff in the contest, but their goalless third term made it a margin too great.

Brisbane Lions academy member Connor Ballenden clunked five marks and had 18 hitouts spending a large portion of the day in the ruck contests, while Jack Payne was solid in defence with five rebound 50s from his nine disposals.

South Australian Hugo Barry had to be stretchered from the field in the last minute of the game after injuring his knee.

South Australia will have the week off before their trip to Etihad Stadium to face Vic Metro on Friday June 30th, while the Allies travel to Perth to face Western Australia on Sunday at 12.30pm