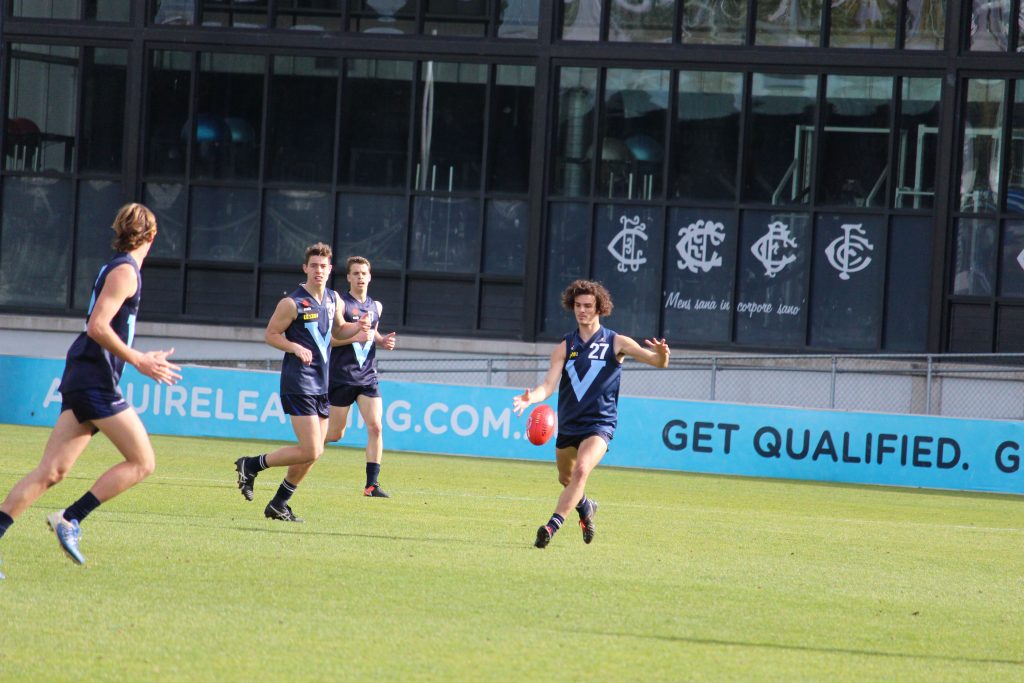 VIC METRO enters the National Under 18 Championships as the short priced favourite to take out the title – but don’t be putting your house on it, with one unexpected result already taking place in the opening game of the carnival. After winning against the odds in 2016 – Metro will be fighting hard to go back-to-back but will need to be on their game to avoid a slip up in their opening fixture.

A deep midfield will allow them to float multiple players through the centre to find the best combination, with Eastern Ranges pair Adam Cerra and Joel Garner two such players who will likely have time in the guts, while Jack Petruccelle’s elite speed will provide a point of difference as he bursts from the packs getting the ball forward.

Medium forwards Cameron Rayner and Jaidyn Stephenson are elite marks overhead and as a bonus they can push into the midfield and win their own ball. Sandringham Dragons captain Hayden McLean will be one of the key targets infront of goal, while Will Sutherland and the tall King twins (Max and Ben) will have their opportunities through the latter stages of the carnival.

Noah Balta has seamlessly transitioned into a key defender and is looking the goods. His role will likely see him take the most dangerous opposition forward, where he can use his outstanding agility and big leap to his advantage.

Overall Metro will likely boast more of the top 20 than any other teams at this point in time – but as we have seen time and time again, the next four weeks are the make and break for players pushing their case in front of club recruiters.

Jack Higgins – The midfielder/small forward averaged 20 disposals in his appearances for Vic Metro in last year’s carnival. Higgins is a very good goal sneak and is agile enough to get around opposition defenders. As a prolific ball winner, expect him to be one of Metro’s best performers in the championships.

Joel Garner – The captain of the Vic Metro team has had a solid start to the year at school and TAC Cup level. Has a long left foot and can play at all ends of the ground. Will mostly play as an outside midfielder, but his hands in close mean that he can be as damaging in the contest.

Cameron Rayner – The exciting midfielder can push forward and take excellent marks overhead. He has the ability to make things happen in a quick burst thanks to his power, and his X-Factor will appeal to clubs as a player who could content for the No.1 pick.

Jaidyn Stephenson – One of the better marks in the draft pool for a player sub 190cm. Stephenson will play as a target up forward and has a good burst of speed that adds another dimension to the marking forward. Played in Vic Metro’s game against Vic Country last year and looks set for a big carnival after showing midfield craft for the Eastern Ranges.

Will Sutherland – Sutherland won’t be running out for Vic Metro this weekend against Western Australia, but will likely line up when Metro play their games in Victoria. Sutherland is a good mark overhead and has pushed into the midfield for Scotch College using his great agility for a tall, attending multiple centre bounces. Clubs believe he could be worth an early selection should the talented cricketer choose the football pathway.

Recruiters won't get to see Will Sutherland play for Vic Metro v WA on Sunday, instead he will play @APS_Sport school footy on Sat #AFLDraft https://t.co/j5wMcSZZ9r

Ben King – One of the top talls alongside brother Max for the 2018 draft. Ben is a natural key defender with an athletic leap, who reads the play superbly in defence. He will miss the opening game of the championships, but expect him to make an impact at some point in the Under 18 Championships.

Max King – One of the top talls alongside brother Ben for the 2018 draft and is a contender for the number one pick in 2018. The key forward has an athletic leap and can clunk some super marks inside 50. He will play school footy & miss Metro’s first game against WA this weekend, but expect him impact up forward when given the chance.

Curtis Taylor – One of the 2018 eligible draftees who were stiff to miss out on AFL Academy recognition after putting on some superb displays at school football for PEGS last year. Has recently returned for PEGS and Calder Cannons after an injury, and is currently little known by some – but is a player I’d expect to leave a lasting impression should he play in the Under 18 Championships.

** – The Round two teams will be publicly announced tomorrow afternoon.

Finishing prediction: 1st – Metro have all the class around the ground and are short favourites to go through the NAB AFL Under 18 Championships undefeated. However – as we’ve already seen in the opening weekend upsets do happen and Western Australia should be able to push them at least for the first half this weekend. Anything is possible in the Under 18 Championships results wise, but it is Vic Metro’s title to lose.

MVP prediction: Jack Higgins – Higgins was a good contributor in the 2016 Under 18 Championships as a bottom ager and will likely play a key role through the midfield & as a small forward inside 50. Expect him to push forward and hit the scoreboard using his smarts around goal. Should be a key player in Vic Metro’s attempt of winning back-to-back titles.