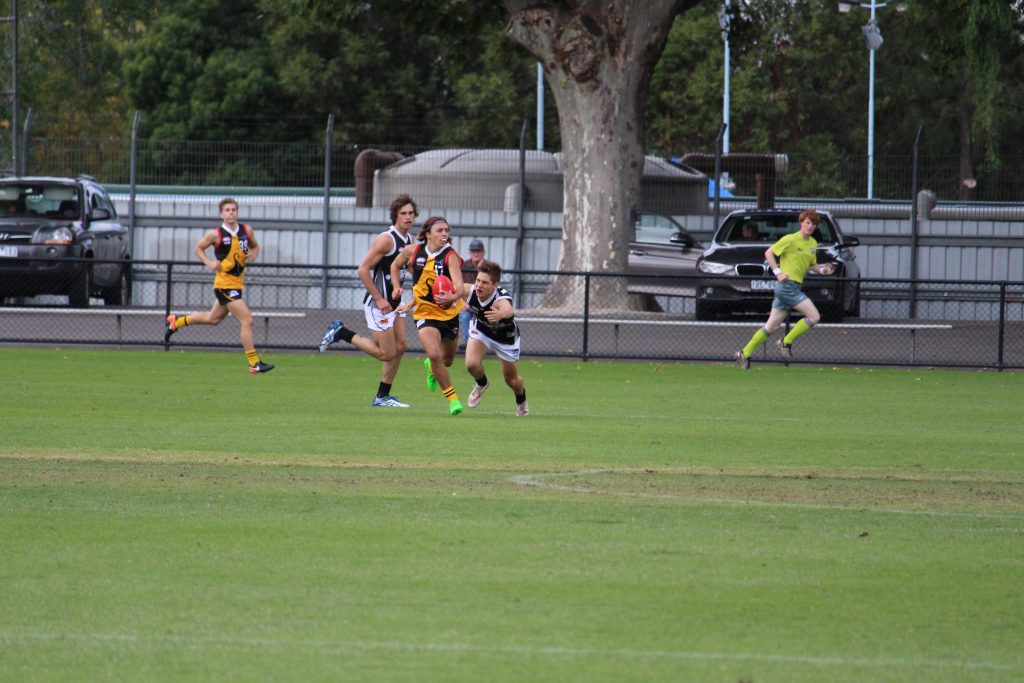 PLAYING his role for the team and seeing where it takes him is all Greater Western Victoria Rebels’ onballer Trent Reed is concerned about this season.

While others might be weighed down by the pressure of playing in the TAC Cup and juggling football with studies, Reed is happy to just focus on performing week in, week out for his team.

Reed, who hails from Hampden league club Cobden which has an impressive list of alumni – Ben Cunnington, Gary Rohan and Jackson & Zac Merrett – is pleased with how his 2017 season is going and the atmosphere around the club.

“It’s going pretty well, my form is alright I guess,” he said. “I love it down at Greater Western; it’s a good club, good atmosphere, a great coach, just a good bunch of blokes. “I don’t feel much expectation on me as much as there would be on other players.”

Reed said his role had developed into more midfield minutes this season, after spending time forward in his bottom-age year in 2016.

“I’ve been playing more of a midfield role this season,” he said. “Last season I’d play mid-forward, but this season I’ve been more of an inside midfielder.”

Reed admitted the 2017 team lacked the elite talent it had in 2016 – which saw Hugh McCluggage, Jarrod Berry, Cedric Cox and Willem Drew all drafted into the AFL in the top 40 picks – but it made up for it in youthful exuberance.

The Rebels will miss Cal Wellings, Lloyd Meek and Jordan Johnston if the trio are selected for Vic Country in the National Under 18 Championships, but Reed knows having a reasonably consistent team will help the club over the next few months.

“It hasn’t been talked about, but I guess we know that (being close to full strength is a benefit),” he said. “Only missing three players, we’ll be pretty handy coming into finals.”

When asked which teammate he felt was the most unlucky not to be selected for Vic Country, Reed singled out one of the Rebels’ outside classy ball users.

“Aiden Domic was a bit stiff,” he said. “But you don’t know what the talent scouts and the blokes at Vic Country are thinking.”

As for teammates he looks up to, Reed said it was hard to go past the captain.

“Cal Wellings is definitely one,” he said. “He’s a legend and a born leader. “He just knows what he’s talking about, he really helps me in understanding my role.”

Reed is also aware of what he needs to do to improve and put his name forward to AFL scouts.

“(I need to) run forward and kick more goals,” he said. “My role is to be that tough inside midfielder who dishes off to outside runners coming past.”

Much like everyone else in the TAC Cup and under 18 competitions across Australia, Reed has his eyes set on playing at the elite level, but the 18 year-old said it would be remiss not to have alternative plans should the dream not pan out.

“Playing AFL would be my dream,” he said. “But if not, everyone’s got to have a Plan B. “Maybe I might play VFL or another league. “I’m just going to try my best, play hard as I can and do as well as I can.”