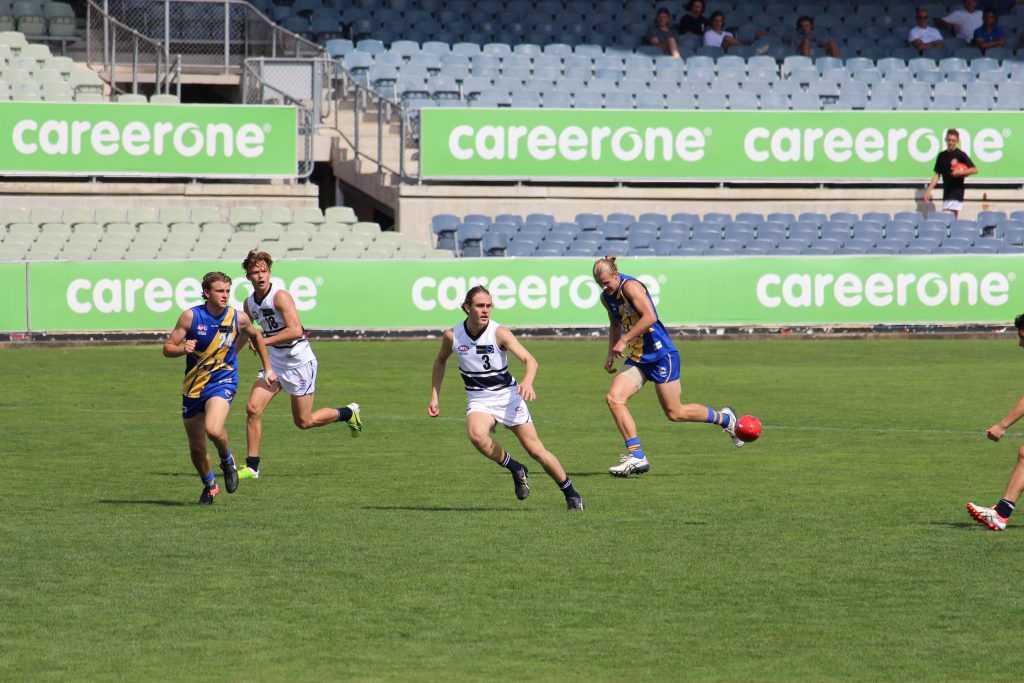 PUNT Road Oval played host to two games on Saturday afternoon, with both Victorian Under 16 teams having a final hit out in the lead up to the NAB AFL Under 16 Championships which begin in a fortnight.

#5 Isaac Grant – One of the better Vic Country players playing inside 50. Has speed and good agility making him a tough opponent. The right footer booted the first goal of the game – but at times he did rush his disposal which decreased his efficiency by foot. Overall looked a decent prospect to track over the next two years.

#8 Thomson Dow – Another Dow looks likely to come into the Vic Country program – with the athletic wingman showing promise. In the last quarter, he showed good dash and burst from the stoppage. The right footer was ok by foot – but early in the game did double grab a few of his disposals.

#11 Sam De Koning – Played as a tall defender and was impressive. Took three marks in the opening half, always marking then playing on straight away by hand to the runner next to him. Got to the right positions and was good overhead.

#16 Tom Richardson – Booted a few goals as a lead up forward. Ball drop was a bit wonky but he was able to be effective more times than not. Has a good burst over 5m which allows him to get distance between himself and the defender.

#18 Hayden Young – By far the best player on the ground playing as a centre half back. He used his long left foot to effectiveness and was superb overhead. He provided multiple rebound 50s and possess good hands in close. One of the better 16 year olds I’ve seen running around eligible for 2019.

#4 Cody Harrison – Played as a inside midfielder and laid multiple tackles. His pressure was also good and had quick hands in the contest. Took a good mark inside 50 and booted the goal.

#6 Dale Cox – Played mostly on the wing and early in the game tried to use his pace but was tackled when he attempted to take on one too many players at speed. He has a laid back kicking technique but majority of the kicks were effective. One passage coming out of defensive 50 late in the game was impressive.

#10 David Smith – Lined up at the centre bounce – but he is definitely more of an outside player than inside and was moved very quickly after that. His decision making does need some work and he often went to ground rather than keeping his feet. Won the ball at speed and was willing to throw out a fend off to get the Country players out of his way.

#16 Cassius White – The Under 16 was definitely the player that caught the eye and looked to be someone worth tracking. Had three dashes on the wing and down the middle of the ground that saw no Country player able to get near him. Took the game on and was solid off his right foot – but it was his elite speed that made him really stand out.

#17 Phillip Soloman – The bottom ager showed plenty of promise and will be someone Richmond will be hoping to develop (and get him approve and onto their list of Next Generation Academy players). Had his knee strapped but it didn’t slow him down on the outside. His agility was very good and at one stage got around five country players with ease, weaving through them all. Hands were good at the contest and was solid off his right foot.

#1 Cody Hirst – One of the better players on the ground (especially in the opening half), using his speed as an outside midfielder/small forward. The small Eastern Ranges product has a nice left foot and hit the scoreboard on multiple occasions. One to keep an eye on.

#2 Shane Skidmore – The right footer played up forward and through the midfield, showing a good burst of speed to get distance between himself and the opposition defender. Took a good mark inside 50 and convert the chance. Kicking was just ok.

#3 Zak Butters – The Western Jet played a good game but was often brought down by his kicking – which was poor due to his ball drop. Took some good marks inside 50 and had multiple chances on goal missing a few. Laid a very strong tackle in the first half and his pressure was good. A nice intercept mark inside 50 was great in the third quarter.

#6 Xavier Fry – Has some speed and booted a goal from the goalsquare in the opening quarter. Was a good mark overhead, but another let down by his kicking – was very right foot dominant and didn’t appear to have a left foot. One that I’ve heard big wraps about, so looking forward to tracking him into next year.

#10 Brayden Gillard – Has impressed with the Northern Knights early this season. Shanked a kick on goal in the third quarter – but did manage to boot one for the game. Was composed with ball in hand.

#12 Liam Stocker – The Haileybury College student was great against Scotch College last week and did some nice things across half back for the Futures team. Willing to go in at the contest and is a hard handballer.

#23 Stefan Radovanovic – Best player in the second half of the game. Has an exceptional burst of speed and a huge third quarter really saw him lift his game. Made a great pass to Mason Fletcher late in the game using his vision to spot him up forward. Played on the inside in the final quarter and continued to pressure through the midfield. One to watch.

#26 Mason Fletcher – Played as a tall defender in the first half, before switching forward. Finished the day with four marks and was willing to block to help his teammates at either end. Kicked a brilliant goal in the third quarter in front of the crowd but was caught behind on a few occasions up forward. Looks a better defender – but at times I question his mobility as he does have an awkward running style.

#8 Daniel Mott – Was willing to take the game on on the outside and possessed clean hands. The right footer used his speed and agility throughout the game and flashed in and out.

#10 Lachlan Potter – Has serious ‘wheels’ on the outside. The right footer was decent by foot – but occassionally let down by a high ball drop. In traffic he showed his smarts.

#11 Finn Maginness – Missed last weeks school game for Scotch but return and played a decent game for the Under 16s. Started on the wing and used the ball ok off either foot. His hands inclose were good and has good vision right around the ground.

#15 James Ross – Was excellent in traffic and provided good follow up for the Metro team. With ball in hand he showed good composure.

#17 Liam Witts – Played as a defender and intercepted on a few times. Provided good rebound on his left foot.