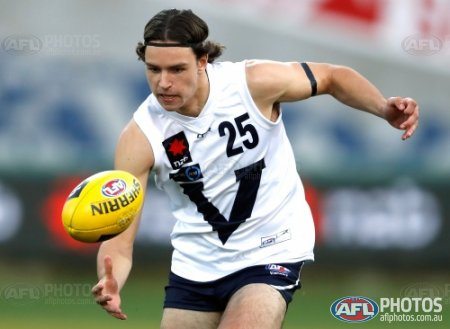 POSSIBLE number one draft selection Luke Davies-Uniacke stamped his authority as one of the best players in the 2017 draft pool, starring in Vic Country’s 12-point win over the Allies at Blacktown on Sunday.

In what was a high quality game and had a seesawing second half, 187cm and 85kg midfielder Davies-Uniacke used his strong frame in the contest to gather a game-high 34 disposals, 10 marks, five inside 50s and four clearances.

The AFL Academy member was a standout in their loss to the Northern Blues back in April and has continue to show his ball winning abilities at school football level for Haileybury College.

Fellow AFL Academy midfielders Paddy Dow (21 disposals, six clearances and one goal) and Hunter Clark (21 disposals) were also among Country’s best players in the second game of the NAB AFL Under 18 Championships.

Dow showed his burst from the stoppages, with his goal just before half time vital in giving Country the lead going into the main break. James Worpel had a game-high 11 tackles working hard on the inside.

Bendigo Pioneer Kane Farrell returned to form with 21 disposals after a quiet few weeks at TAC Cup level, while Murray Bushranger Ben Paton rebounded the ball well out of defence finishing with 22 disposals.

Geelong Falcons bottom-agers Ed McHenry (23 disposals and eight tackles) and Sam Walsh (22 disposals) were impressive through the midfield and up forward.

Tasmanian Hugh Dixon booted three third-quarter goals to kick start the Allies’ third term, seeing them boot four goals to one, to take the lead at three quarter time. But it was all Vic Country in the final quarter, where they booted four goals to none.

Likely top five selection Jarrod Brander shone at centre half back relishing in the new role compiling 20 disposals, rebounding it well out of defensive 50 on nine occasions.

GWS Academy midfielder Nicholas Shipley was the Allies highest disposal winner with 21 disposals, impacting the game through the midfield.

Tasmanian bottom ager and North Melbourne Next Generation Academy member Tarryn Thomas showed his class with 18 disposals and looms as an early pick in 2018.

Small midfielder Charlie Spargo finished the day with 18 disposals and six tackles, while small forward Jack Hardman was impressive early booting a goal in the first quarter for the Allies.

Sydney Swans Academy member Luke Robertson suffered a nasty broken leg in the opening quarter, with the game being halted while he was carried from the field.

The Allies will travel to play South Australia next Saturday in a televised match on Fox Footy at 10.10am, while Vic Country have the bye.