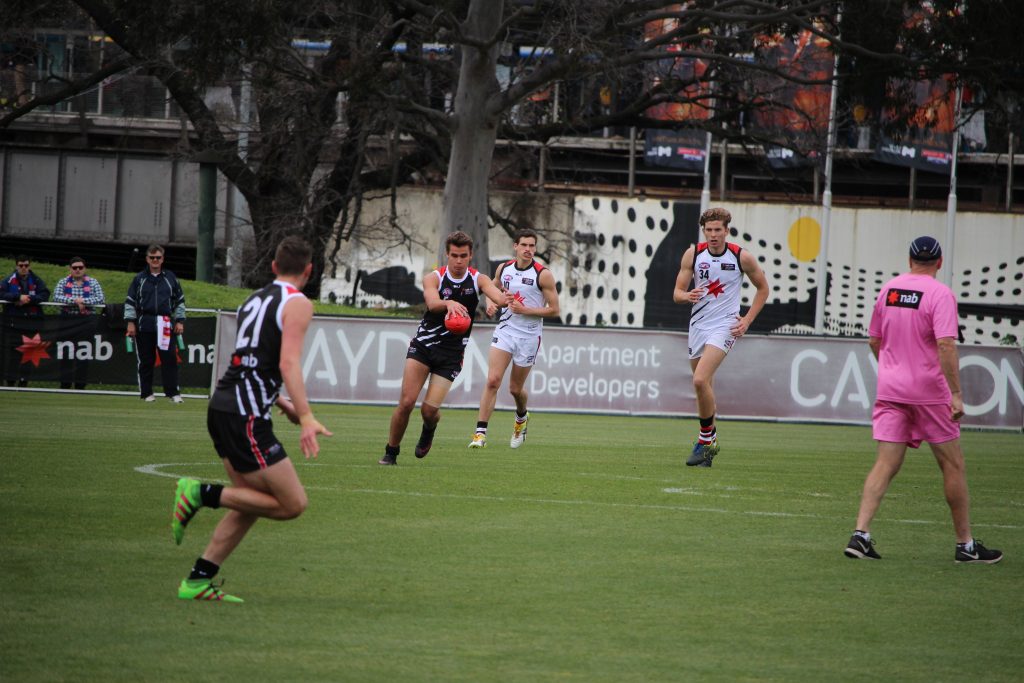 WESTERN AUSTRALIA enters the National Under 18 Championships with a heavy reliance on their bottom agers in order to remain competitive in games this year. WA at this point of time don’t have a clear first round draft prospect like they did 12 months ago with Sam Petrevski-Seton starring early in 2016 for the NAB AFL Academy. It looks likely that WA will have just a handful of players drafted come November 2017.

Tall defenders Sam Taylor and Aaron Naughton have impressed at times and will the ‘twin towers’ in the backline attempting to hold the fort, while up forward Oscar Allen is a talented player who might be Western Australia’s first player drafted. Allen and Naughton have been named as co-captains.

Bottom agers Ian Hill and Sydney Stack have shown off their skills for the NAB AFL Academy and the pair will headline the large crop of bottom agers named in the WA squad. Fremantle Next-Generation Academy prospect Jason Carter, will miss the championships with a knee injury that was suffered in their final trial match in the lead up to their first game.

Oscar Allen – The Athletic utility was named in the WAFL Colts Team of the Year at centre half forward in 2016 and has shown good signs early in 2017. His versatility has been evident; with stints in the ruck, time in defence and playing as a tall up forward with six goals for the season. He also won the Round 6 RediMed Colts Young Gun award for his 25 disposals, 11 marks and five tackles game. His strong marking ability is something that catches the eye and he is a good decision maker with ball in hand. He will line up for Western Australia at centre half forward.

Aaron Naughton – Played as a tall defender for Western Australia in two of the Under 18 Championships games last year. He marks well overhead and is a good reader of the play in the defensive half of the ground. In the Colts competition in 2016, his 20 contested marks from 13 matches had him ranked second in the competition and lead to him being selected as full back in the 2016 WAFL Colts Team of the Year. This season he is averaging 16 disposals and seven marks per game, playing mostly in defence, with stints up forward. An area of improvement is his kicking which due to an awkward ball drop can affect his left foot kicking efficiency at times.

Sam Taylor – Another tall defender who played for Western Australia last year. Taylor was a late addition to the NAB AFL Academy and showed some promise as a key post in the AFL Academy game against the Northern Blues VFL team. His Round 7 game in the WAFL Colts was impressive, with 25 disposals and 11 marks earning him a nomination for the RediMed Colts Young Gun for the round. His kicking on his right foot is one area that he’ll be looking to keep working on, but the tall has shown he can read the flight of the ball well in defence.

Jake Patmore – Provides an element of speed as one of two Western Australian’s that were part of the NAB AFL Academy. Patmore possesses elite speed and looks best across half back or on the wing, where he can run off opponents. In his six Colts games for Claremont, he is averaging 27 disposals as a standout player in the start of the season. The right footer had eight disposals and two tackles in the NAB AFL Academy game against Northern Blues VFL team, using his good hands in close in the second half. An area of improvement is his defensive efforts – laying just 10 tackles in six Colts games.

Ian Hill – Arguably Western Australia’s best draft prospect for 2018. Dominated in the Under 16 Championships and the small forward has the capabilities of pushing further up the ground. Is a cousin of Fremantle’s Brad and Stephen Hill. Has a great burst of speed and knows where the goals are. A good ball user on either foot.

Sydney Stack – Despite standing at 179cm, Stack goes in hard and is competes well at the contest. His defensive efforts are good – tackling and pressuring the opposition midfielders. Averaging 17 disposals in the WAFL Colts, including three games with six tackles or more.

Finishing prediction: 5th – Western Australia are the likely candidates for the Wooden Spoon in the Under 18 Championships, but as we have seen on multiple occasions results can go unexpected ways. They should be able to push Vic Metro in the first half in their second game and are advantaged by three home games in the carnival.

MVP prediction: Oscar Allen – Tall utility Oscar Allen might be one of the shining lights in the Under 18 Championships and if he can show off his marking ability up forward and hit the scoreboard, Allen might find himself talked about as a first round draft prospect if he isn’t already.