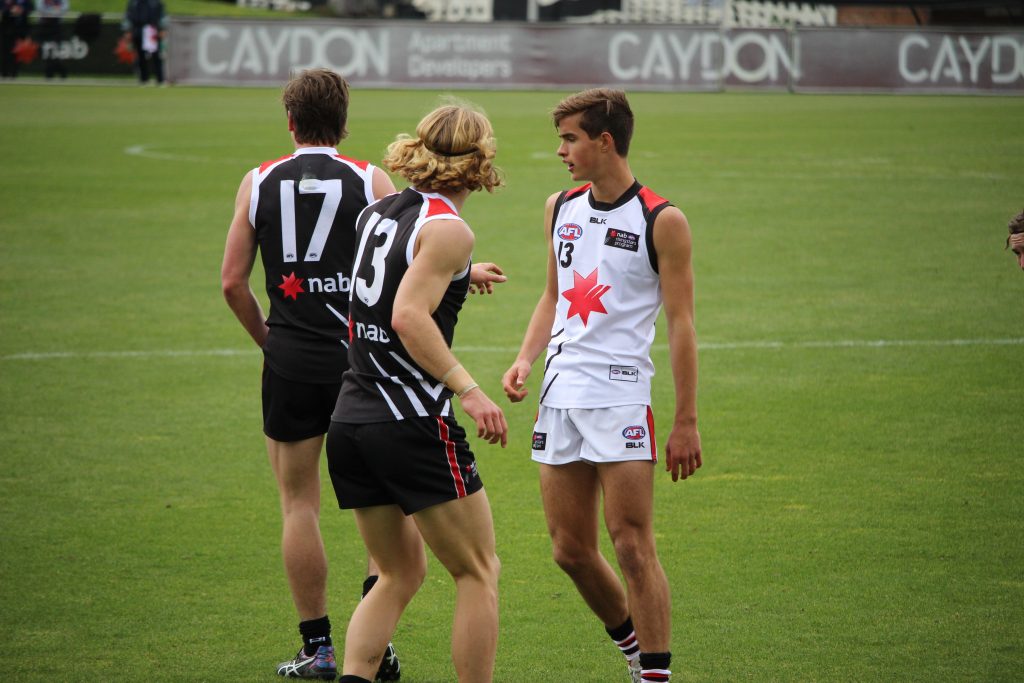 SOUTH AUSTRALIA enters the National Under 18s Championships lacking the star power that both the Victorian sides have. In saying that – they do appear to be a well balanced unit with a large number of prospects who look likely to feature throughout the middle stages of the draft.
SA have a number of excellent ball users, particularly off half-back, grunt in the midfield and some tall timber who are capable of fulfilling key position spots at either end of the ground. This squad is versatile and we can expect to see a number of players being used in a variety of roles. Sturt big man Callum Coleman-Jones will lead the side with Darcy Fogarty and Andrew McPherson named as joint deputies. However. McPherson will miss the opening two games of the Under 18 Championships with a quad injury.
With five level two AFL Academy players in the squad, along with seven level one prospects, perhaps next year will be more fruitful in terms of star talent, but don’t go ruling them out in 2017. Although Vic Metro looked primed to go back-to-back, I think South Australia can realistically mount a push. The battle with Vic Country on July 5th could prove particularly instrumental.
Players to watch:
Darcy Fogarty – Undoubtedly South Australia’s best draft prospect and he is well in truly in the mix for the number one selection. Despite not starring, Fogarty has been a regular fixture in Glenelg’s senior side and posses the unique ability to be able to cover any position on the field apart from the ruck. He slotted in at half-back in an SA trial match earlier in the season but has also shown serious promise up forward and as an inside midfielder. At 192cm, he could become a third tall forward at AFL level, but I expect him to feature in the guts in the Champs.
Alex Martini – Fogarty’s teammate at Glenelg has also proven himself in the SANFL  League side, having played predominately off half-back. Martini captained Sacred Heart College last year and his on-field leadership will be crucial – He may spend more time in the midfield with the half-back line looking impressive for SA.
Jackson Edwards – The son of Tyson Edwards is a father-son prospect for the Crows and although he is yet to break into the Glenelg league side, he has been solid so far in the Reserves. He has a touch of class about him, much like his father, and will be a vital cog in the on-ball brigade.
Nathan Kreuger – Kreuger has potential to burn and at 194cm – he is one who can hold down a key position at either end and at times has even been deployed as a big-bodied midfielder. Athletic with neat foot skills, I can see Kreuger pushing higher up rankings with a strong National Championships. However he has been left out in Round one and will have to fight to break into their team for their remaining fixtures.
Callum Coleman-Jones – The Key Forward/Ruckman will be eager to assert his authority on the champs. Despite requiring some work on his endurance, Coleman-Jones is a great contested-mark and an imposing figure both in the ruck and when sent forward. Looking forward to his duel with top five candidate Sam Hayes when SA clash with Vic Metro at Etihad Stadium but would prefer to see him at full-forward.
2018 names to keep an eye on:
Jack Lukosius – Lukosius could well be the number one draft pick in 2018. The Woodville-West Torrens star is already lighting it up in the SANFL ranks. Yet another South Australian with the ability to play at either end, Lukosius has excellent mobility for a guy of 193cm and the foot skills of a midfielder.
Izak Rankine –  Rankine has as much talent as any 17 year-old in the country and will strut his stuff up forward and on the wing for South Australia. Possesses good agility and has X-Factor.
Connor Rozee – Won the Kevin Sheehan medal as the best player in the Under 16 carnival and is a classy midfielder on both the inside and outside. Vision is very good in traffic and is a clean user by both hand and foot.

Finishing prediction: 2nd – I doubt South Australia will have the star power to overcome Vic Metro, but wins over Western Australia and the Allies are expected, and if they can account for Vic Country they will be in good shape for a crack at their first title since 2014.

MVP prediction: Darcy Fogarty – There are a number of ‘ready made’ talents in the South Australia squad who have already experienced SANFL Macca’s League football, but Fogarty is at this stage the only out-and-out star in my eyes. He is a real talent with that modern day frame and provides a presence wherever deployed. No doubt he will have learnt from playing against men for the ‘bays’ and will surly be up there on draft night come November. Can push forward and hit the scoreboard.