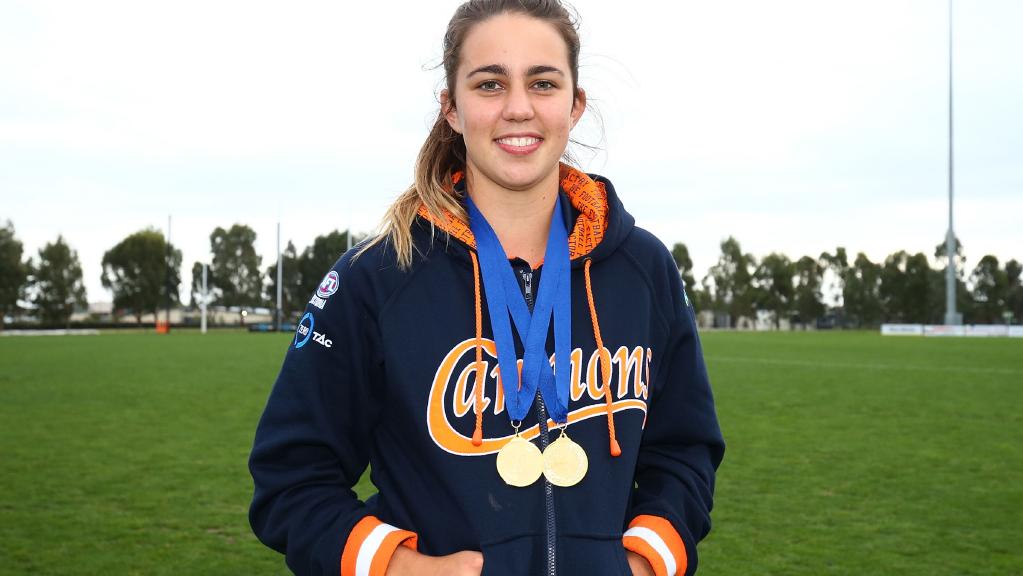 Life of a footballer is a personal insight by Calder Cannons and Diamond Creek footballer Chloe Molloy. The Life of a Footballer series follows on from last year’s edition which saw Bendigo Pioneers’ midfielder Jamieson Sheahan provide us insights into the inner workings of a TAC Cup club. In 2017, Chloe Molloy has joined the AFL Draft Central team and will give readers an insight into how she juggles university studies with her football at Diamond Creek, and her pathway to follow her dream into the AFLW. Without further adue, here’s an introduction into the life of Chloe Molloy.

Finding that happy medium for me between football, university, working and ‘me time’ hasn’t been the easiest of tasks for me. To introduce myself, I am Chloe Molloy, I am a woman, and I am a footballer. I recently represented Calder Cannons in the girls 2017 TAC Cup and I am also a ‘baby creeker’ at the Diamond Creek Women’s Football Club.

I have a long background in basketball, representing at a state level, before swapping codes and rekindling my passion for the oval shaped ball.

I currently study full time at Holmesglen University, in a Bachelor of Sports Media course. I work two jobs, local café and a Game Development officer with the AFL. So that’s enough about me, lets get into the footy talk.

So to kick it off, I’m going to relive the first girls TAC Cup season, which was short, but sweet. We played at total of five matches, the last being held at RAMS Arena. Which for the Calder Cannons was historical. Because for the first time ever, the Cannons girls had taken out the TAC Cup in its inaugural year. It was a grouse day to win a premiership might I add, all the teams were there, and from what I can recall it actually wasn’t too windy. We battled out of last match against Bendigo Pioneers, that was a very congested game, but the final score recounted as 10.16 (76) (Calder) to 2.1 (13) (Bendigo). I was fortunate enough to win the leading goal kicker award, as well as joint Best and Fairest of the league alongside a talented Stingray, Bridie Kennedy.

After the Cannons had concluded, I was to start my senior football career with the Diamond Creek women’s team. It was crazy to think that I’d be playing along side AFLW players, like Steph Chiocci. I go from watching her run amok with Collingwood on TV, to being her leg swing partner at training. Crazy. Little sidenote too, Steph and I share a birthday!

So there have been four rounds so far in the VFLW, and fortunately enough I’ve been able to play in all these games! Snagging a few goals here and there, but our most recent game was against the Geelong side, who had been #undefeated, but little did they know that their hashtag was soon to be taken away from them. We dominated the whole game, I played up forward, and then in the next half moved up the ground a bit to play a different role. We got away with a dominant victory, 11.11 (77) to 2.3 (15). We now were the #undefeated team, and have perched ourselves up on top of the ladder. We battle it out against Bri Davey and her St Kilda Sharks next week!

But in saying all this, I also study and work. It is hectic to say the least. To define hectic here is a little insight to what my previous week looked like:

So my weeks are a little busy, as you can see, not a lot of ‘me time’, but I wouldn’t change my lifestyle for the world. Football has been in my blood since I was a young tacker.

Keep updated on my posts, read them, judge them, comment on them, but if you’re going to judge than I better see you at one of Diamond Creeks games, so we can blow you away with our talent.