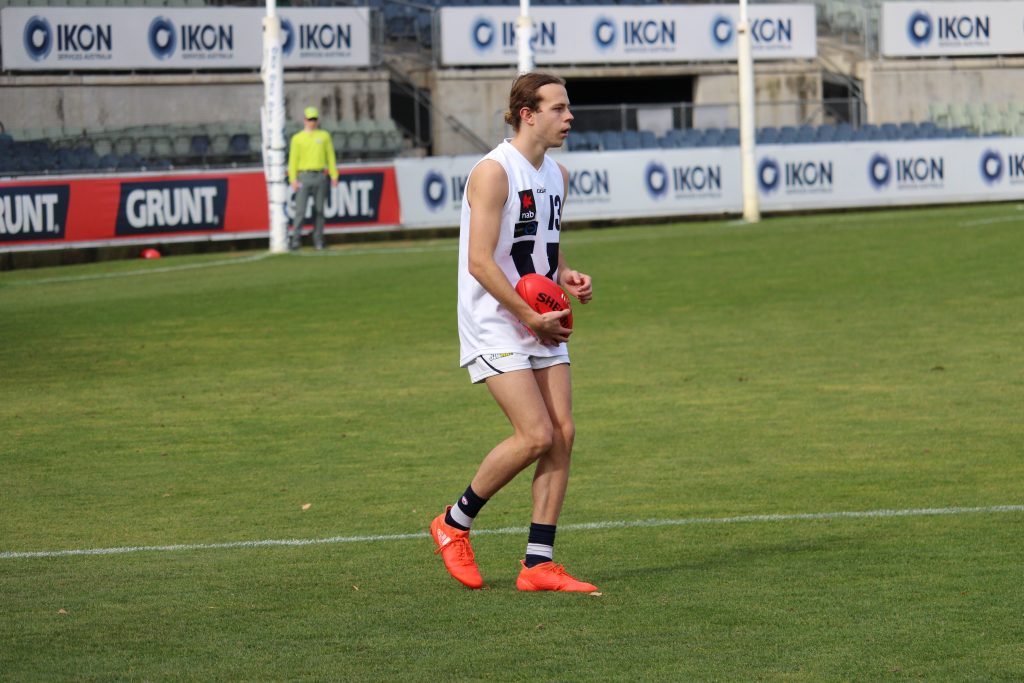 VIC COUNTRY enters the National Under 18s Championships as a big question mark given it failed to produce a win last season despite being one of the favourites. In 2017, Country has a greater depth of inside ball winners, but less class on the outside, while a plethora of key forwards and the best key defender in the draft help straighten the team up.

It is well known that contested ball and clearances are a key to winning a football match and Country have plenty of players that can do that. Headlined by Dandenong ball winner Luke Davies-Uniacke – who could well be a top two pick – Country also has James Worpel, teammate Cassidy Parish and Stingray Hunter Clark.

On the outside, Country will need to rely on the likes of Matthew Ling, Lochie O’Brien and Harry Benson to provide some dash and get crucial inside 50s to Tom De Koning, Bailey Williams and Tom McCartin. Murray Bushranger Jordan Butts played forward in the trial game, whether he stays there or goes back is largely unknown and it could depend on whether or not the likes of Power duo Cody Henness and Sean Masterson are playing.

Stingray Oscar Clavarino will stand tall in defence and take out the opposition’s best forward, while Ethan Floyd and Ben Paton take the game on and try and penetrate zones with their kicking off half-back. Up forward, Jordan Johnston, David Handley and Gryan Miers are likely to cause headaches for opposition teams, providing both offensive and defensive pressure. Meanwhile in the ruck, Rebel Lloyd Meek will share the duties with Gippsland’s Julian Patterson.

Luke Davies-Uniacke – The standout player in the country team, using his big frame to star for the Stingrays early in the year before impressing at school football since. Played in defence last season and has now built up to play a huge role in the Country midfield and expect him to lead by example with the other inside midfielders.

James Worpel – Another inside player who has had an indifferent start to the season after a couple of niggling injuries, but the AFL Academy member could be a match winner for Country in the championships. He has the ability to go forward and influence, and will win his fair share of in-and-under hardball in the middle.

Lochie O’Brien – While the other Country midfield stars bring the grunt, O’Brien brings the outside class to the fore. He has not seen a lot of it this season, tagged out of most games at school football, but O’Brien is a dangerous prospect for opposition teams when up and going and will be the player Country looks for to hit-up targets inside 50.

Oscar Clavarino – The star key defender will be the most crucial player to the Country side. He will likely have a different pairing in defence each match, and will be tasked with organising the back six. He does lack some strength for the monster key position forwards, but with few monsters, Clavarino will beat most players one-on-one.

Jordan Johnston – An excitement machine, Johnston provides a different element to the Country forward mix. He is a high flying, accurate goal kicker who is capable on the ground as well. Likened to Jamie Elliott, Johnston has the X-factor about him, and he is just working on the consistency to make him a real danger to opposition defenders.

Sam Walsh – A smooth mover who does not panic under pressure, has great vision and just thinks about his disposal. Walsh is good around the stoppages and is able to spot up teammates that many others might not and uses his smarts to outwit opponents. Has returned from an injury that kept him out of the last few weeks.

Bailey Williams – A key forward to get excited about next year, Williams also has played in the ruck for Dandenong and looks the goods. The bottom-ager could well play every game, but it might depend on if Jordan Butts plays in defence. Either way, when he does play, he is likely to stand out.

Zane Barzen – Very athletic forward who has an impressive vertical leap. Works hard up the ground and then sprints back forward. Is very clean below his knees and moves well. Should get game time for Vic Country throughout the Under 18 Championships.

Possible Round One team:

Finishing prediction: 3rd – Vic Country will finish somewhere between 2nd and 4th with Vic Metro the clear favourite and Western Australia behind the other teams. With the strong inside presence, Country would be favourites against the Allies, but the game against South Australia will be 50/50.

MVP prediction: Luke Davies-Uniacke – The top players stand up when the pressure intensifies so the two tips for the MVP are Luke Davies-Uniacke and James Worpel. Given LDU has played more football this year, we shall go with the big-bodied Stingray.