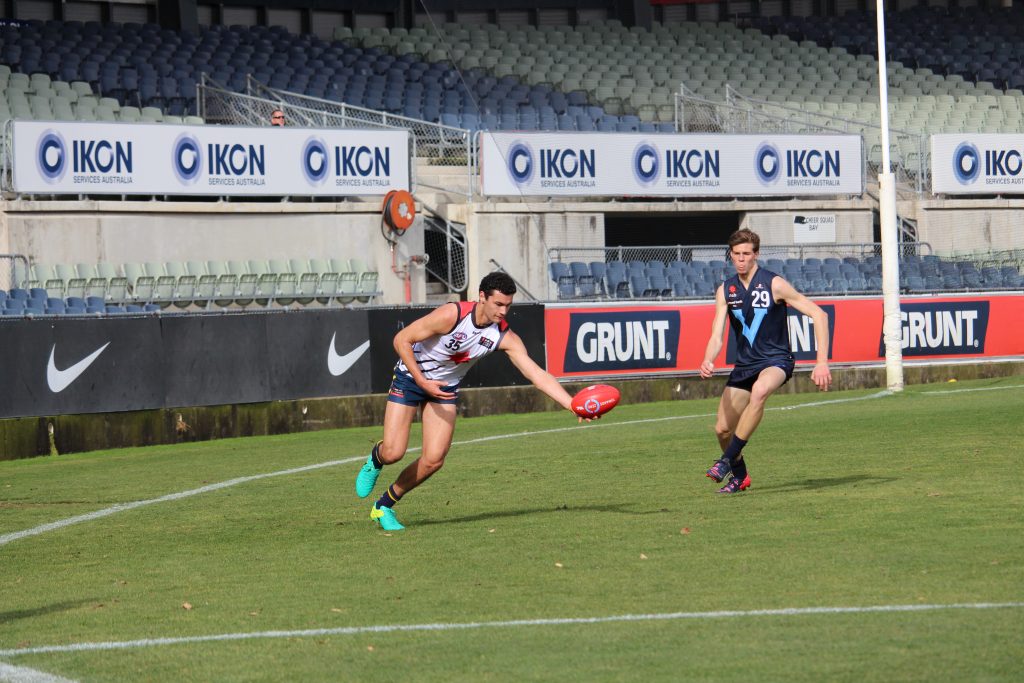 THE ALLIES are in their second year of a relatively new Under 18 Championship concept bringing together the best players from the Under 18 Academy Series (Previously the division two championships) to play against the division one teams.

Last year saw the Allies bookmarked as favourites by some for the title – but struggled coming together just before the championships started, finding it hard to play as a team. This year; a camp as a group and two trial games in the lead up to the division one carnival will hopefully allow the players to adjust to their new teammates and gel as a group.

While the squad on the forefront isn’t as strong as last year, the Allies are expected to put up a fight throughout the carnival.

Greater Western Sydney’s academy has the most members of any division two side, with 12 players included, followed by Gold Coast Academy (10) and Sydney Academy (nine). Northern Territory (seven), Tasmania (six) and Brisbane Lions (four) round out the other division two sides.

Among those named are first round prospects Jarrod Brander and Charlie Spargo (GWS), both of whom were ruled ineligible to be drafted by GWS through the academy system and placed on the open market. Connor Ballenden (Brisbane) is another pegged as a first round talent as one of the best key forwards in the draft.

Zac Bailey – Was one of the standouts for the Allies in their trial game against Vic Country – collecting 18 disposals, laying eight tackles and had five clearances. His work inside the contest is very good despite his small frame. Has enough speed to burst from the stoppages and can hit the scoreboard.

Connor Ballenden – The Brisbane Lions Academy member is a strong contested marking forward who plays well out of the goalsquare. Will likely provide some chop out in the ruck for Brayden Crossley and Nathan Richards throughout the carnival. Has a very fluid set shot routine and kicks more goals than he misses.

Jarrod Brander – Brander is a key position tall that can play at either end. His mobility is very good and he reads the flight of the ball well in the air. Has been kicking goals for Geelong Grammar at school football – but it wouldn’t be surprising to see him play at centre half back in the Under 18 Championships for the Allies.

Jack Powell – The GWS Academy member is a good two-way runner and is a clean ball user on his right foot. Spreads well from the contest and did some good things in the NAB AFL Academy game at the MCG. Had 16 disposals in the midfield for the Allies in their practice game against Vic Metro.

Charlie Spargo – Small bite-sized midfielder who cracks in hard despite standing at 175cm. Wins the contested ball and is willing to tackle hard to get the ball back. Played for the Allies in 2016, with a strong effort manning Vic Metro’s MVP Andrew McGrath at Etihad Stadium – collecting 15 disposals and laying six tackles.

Bailey Scott – Good decision maker with ball in hand and wins the ball on both the inside and outside. Marks well overhead and was impressive for Gold Coast in the Under 18 Academy Series. Had 12 disposals and took four marks in the Allies’ trial game against Vic Country. Father-Son prospect to Geelong and North Melbourne, as well as being eligible for Gold Coast through their academy.

Nick Blakey – One of the leading players for the 2018 draft. Not only can play as a tall, but has the ability to push up into the midfield. Moves well and kicks it nicely on his left foot. Likely to play up forward for the Allies. Sydney Swans Academy member and father-son prospect to North Melbourne and Brisbane Lions.

Tarryn Thomas – Starred for Tasmania last year in the Under 18 Championships as an Under 16 player. Had some outstanding moments in the trial game against Vic Metro collecting 17 disposals, showing off his speed across half forward. Had very good vision and awareness to switch the ball deep inside 50 to find a free teammate at the top of the goalsquare. Is part of North Melbourne’s Next-Generation Academy.

Possible Round One team:

Finishing prediction: 4th – The Allies should be able to beat Western Australia and their tall forwards may cause headaches for other teams if they can win enough ball in the midfield.

MVP prediction: Charlie Spargo – The tough inside midfielder was the Under 16 Alan McLean Medalist, dominating division two back in 2015. Expect him to crack in hard and win the plenty of the ball.

** Zac Buechner was a late inclusion for Tasmania Chayce Jones