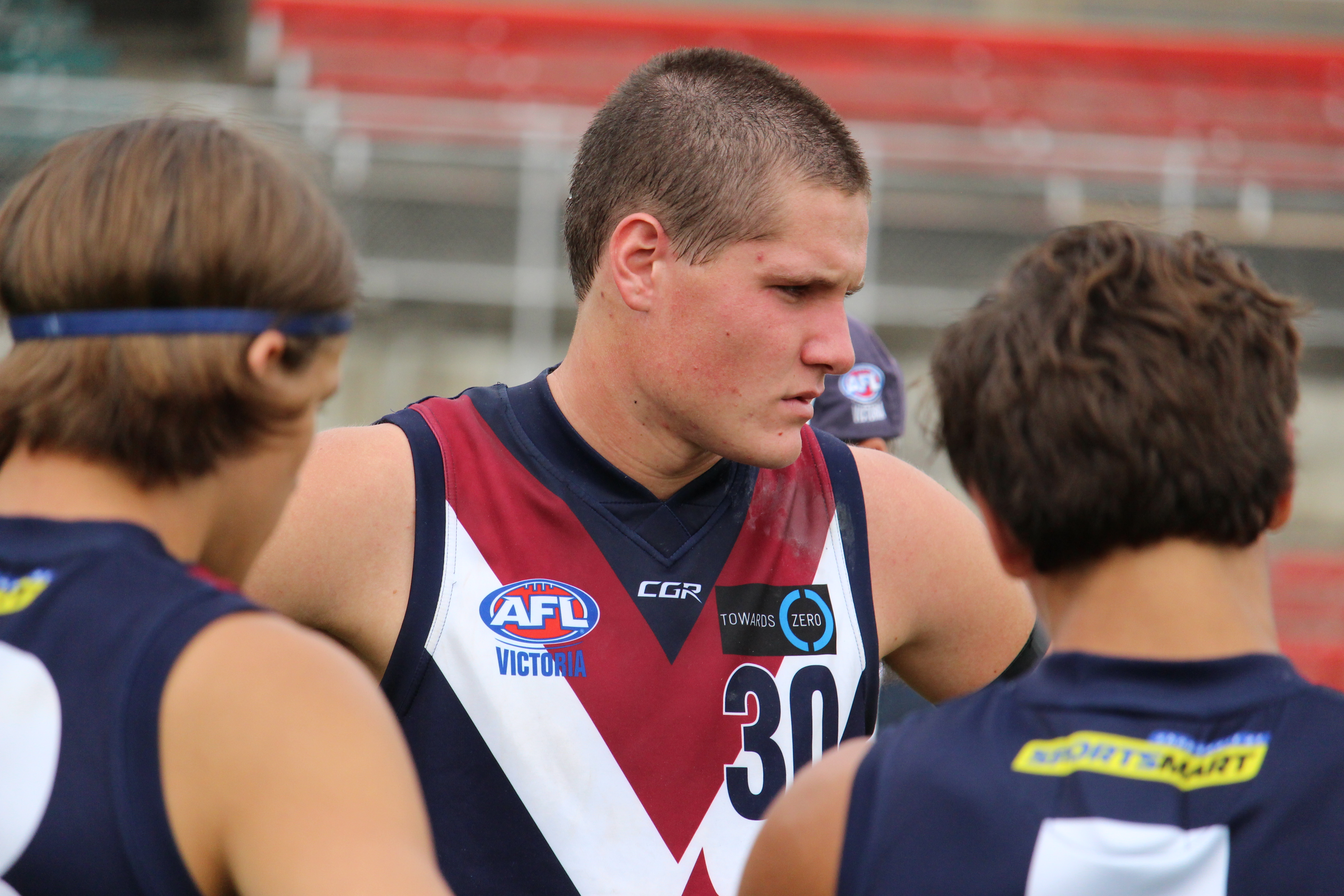 ROUND Eight of the TAC Cup continued over the weekend and we had scouts watching two of the games. Read their scouting notes below:

#3 Lucas Barrett – Started at the centre bounce and played a strong role through the midfield. Has a long left foot kick and zips around the contests with good speed and agility. Smartly hit up Trusler in the third quarter with a good short kick and he spreads well from the contest when Sandringham have possession.

#7 Aaron Trusler – The goal sneak again hit the scoreboard with four goals for the match showing off his outstanding speed and agility. He loves snapping them around the body and was able to kick a few of his goals in that way. His set shot routine is compact and is the same every time he has a set shot at goal. Pressure on the Rebels defenders was huge and he was always busy inside 50. Also had a great hit up kick to Hayden McLean.

#11 Hamish Brayshaw – Continues to go about his work winning the ball in the middle. Kicked a really good long goal from 50m out in the second quarter, as well as clunking a contested mark in the goal square to boot his second late in the game. His kicking can be hot and cold at times – but he is in a great patch of form at the moment.

#22 Quintin Montanaro – Would likely be leading the Dragons Best & Fairest at the moment, but it was a quiet day by Montanaro’s standard on the wing. He was fumbly early and missed a few targets by hand – but his third quarter was his best for the day able to get on the outside and use the ball off either foot.

#25 Max Lohan – The small defender is a solid kick on his left foot and won a good amount of the football. Unlike past games, Lohan only played on from full back once for the contest and found targets short from the kick out. He got further up across half back and was able to make an impact in the first half when the Dragons were under pressure.

#26 Sam Sofronidis – One of the Dragons best players. Took some outstanding marks, including one deep in defence in the second quarter in the goalsquare. He’s a nice size and moves well for a third tall. Also made a really good spoil in the third quarter on the dangerous Johnston.

#30 Hayden McLean – The Dragons skipper kicked three goals in a good performance up forward. His contested marking was on show and he was too strong & tall for the Rebels defenders. Laid some bone crunching tackles through the day, but is a touch slow to pick the ball up from ground level. Played more of a role up forward with less time in the ruck than he has in the past month.

#2 Cal Wellings – Again found plenty of the ball in the centre of the ground, finishing with 28 disposals as an inside midfielder. Has a long kick on his right foot – but at times he did just bomb the ball forward rather than looking for better options inside 50.

#3 Scott Carlin – Was calm and composed in the defensive half. Reads the play well and makes good decisions kicking it well off either foot. He’s not super quick, but his vision to be able to spot a target with ball in hand is very good.

#4 Aiden Domic – Played a good game finishing with 24 disposals mostly through the midfield. He weaves through the packs well and it allowed him to get past a few of the Dragons midfielders with ease. Has great hands in close but like Wellings – was another who just cleared the ball by bombing the ball forward without thinking.

#9 Flynn Appleby – Played a good role across half back, with multiple intercept marks dropping back inside defensive 50. Has a compact right foot kick and has good control of his disposals.

#10 Jordan Johnston – The best Rebels draft prospect in my eyes. Kicked two goals up forward (including a long goal from 50m in the first quarter) and impressively spent some time at the centre bounces – including the first one when the game was hot to start the final quarter. His marking is outstanding for a player of medium height. One that I hope can continue to show great form over the next few months.

#14 Jed Hill – Had some great runs and followed up his disposal well. Kicked three goals, including a tight one in the pocket in the second quarter. His set shot kicking is another positive about his game and the bottom ager has shown signs in 2017.

#23 Lloyd Meek – A down game for the overaged ruckman. Missed a few easy shots on goal which he should’ve converted, but won a good number of hitouts. Dropped a mark he should’ve taken in the last quarter and it was disappointing to see him have a down game. His follow up with his disposals as always was good.

#1 Daniel Johnston– Had a very good game in the ruck and up forward. Lost most of the taps in the centre but was almost an extra midfielder with his follow up work. Very good below his knees and was able to stay in the contest by throwing his big frame around. Showed a lot of physicality and laid some ferocious tackles.

#7 Zane Barzen– Another great game from the bottom-aged forward. He is very athletic and worked up the ground then beat his man back to goal. Picked up a number of balls off his bootlaces and flicked them out to runners in a split second. Was very composed under pressure, and kicked a great goal roving a tap deep inside 50 and stepping around a defender before snapping truly on his left boot.

#18 Hudson Garoni– Used his big frame to work his opponent under the ball on numerous occasions which allowed him to take some big contested marks. Fights very hard for front spot and didn’t let his man have an easy kick. One contest that stands out is when he left his man and ran 20m impact a contest and stop Oakleigh from running the ball out of Murray’s forward line, getting crunched as a result but causing the ball to spill out leading to a score from Barzen.

#30 Alex Paech– Played on Toby Wooller and I would have given the points to the Bushies backman. Played a physical game and put his body on the line and killed a number of contests with big spoils, particularly late when the Murray backline was being peppered with long balls.

#8 Toby Wooller– Showed his marking strength again as he found space and front spot and was rarely beaten in the air. Went into the middle at times and found himself playing on Isaac Wallace at some stoppages, where he was monstered by the young Bushranger. Didn’t seem to know how to use his body at a stoppage and regularly lost touch with his man in close.

#24 Sam Harte– The kid in the orange boots was a running machine, and would have clocked up the most kilometres of any player on the ground. Was regularly buzzing up and down the wing to get on the end of an outlet kick out of defence. His neat disposal was on display going inside 50 a number of times.

#35 Jack Higgins– Higgins has great athleticism. He ran away from Ben Paton on numerous occasions and also showed off a big vertical leap. Took a massive mark over three taller Bushrangers players, flying over the top and taking it on the second grab as he fell to the ground. Was marking the ball up the ground and looking to move it on quickly as he didn’t seem comfortable kicking for goal outside about 40m. Had a couple of shots which didn’t make the distance or were hooked to get the extra meterage.