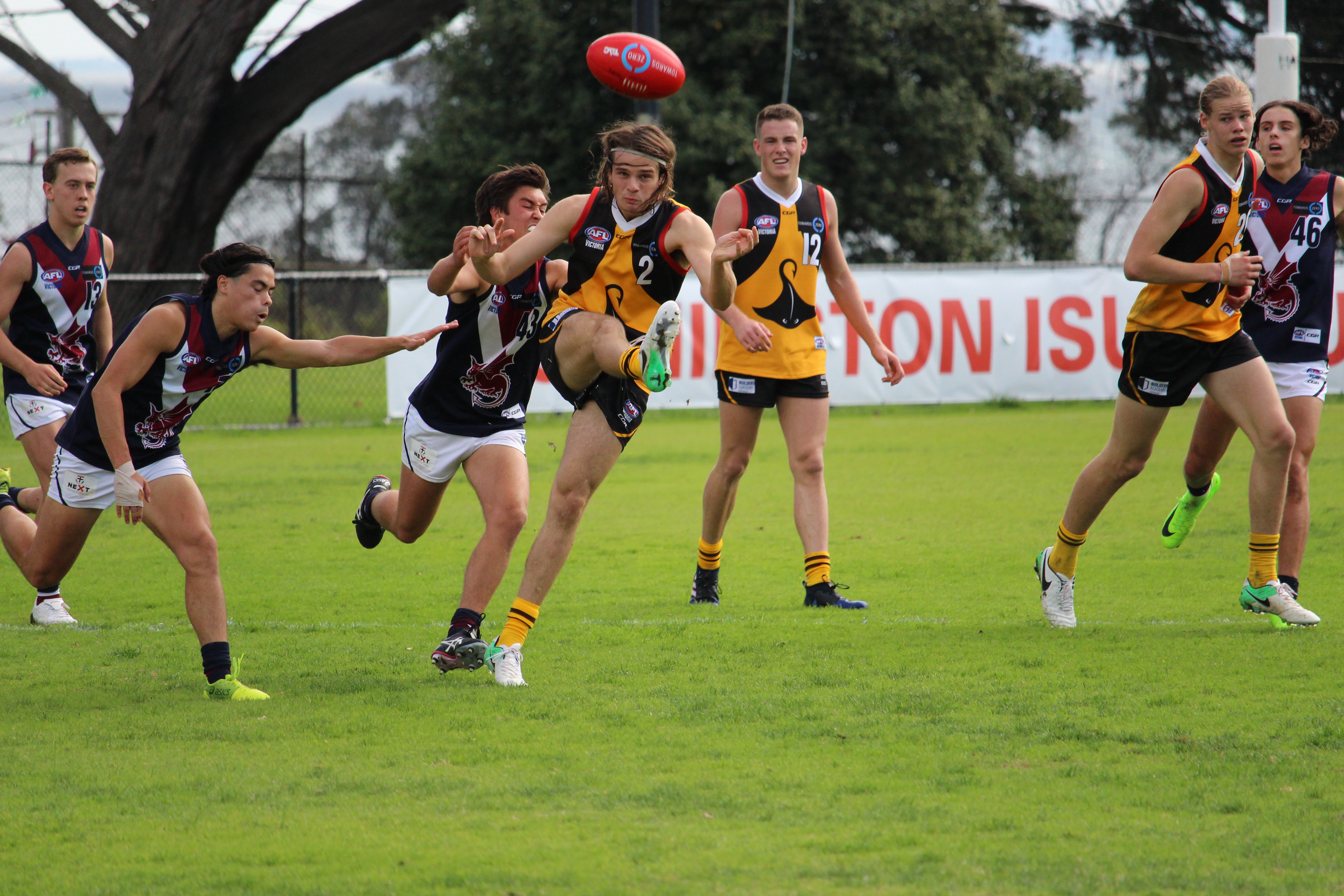 THE Dandenong Stingrays have five level two members of the NAB AFL Academy on their books – And while injury and school football meant that not all five ran out together on the weekend, they are expected to go deep in TAC Cup finals.

Matt Balmer looks in depth at one of their likely draftees.

Hunter Clark is a member of the NAB AFL Academy and a player likely to be selected in the first or second round of the NAB AFL Draft. Clark played in the Under 18 Championships for Vic Country last year as a bottom-ager, predominantly across half back.

In 2017, Clark has improved his ball winning abilities and his contested possessions percentage of 63 per cent in the TAC Cup this season has been impressive. His hands in close are a real strength, where he is able to fire out a handball from the stoppages at a fierce pace.

The dual footed midfielder does have some areas of focus with his kicking an area which does need to be cleaned up. He is kicking at just 50 per cent per cent with 10 clangers by foot this season.

He was at the centre bounce to start the game, but took a while to get his first kick. He stood at a lot of stoppages but there was not a lot of involvement with the ball mostly going to the other side of the contest that he was standing on. He had seven disposals (four kicks + three handballs) in the opening quarter covering the ground.

The second quarter was the quarter where Clark missed quite a few of his kicks, including one out on the full in front of the pavilion. One bad turnover saw him collect the ball from the stoppages and kick the ball inboard hitting an Oakleigh defender square on the chest in the centre squad.

He laid some great tackles in the third quarter. One 30 metres out from Oakleigh’s goal was unlucky to not be rewarded, as well as another on the 50m arch from the Stingrays goal. A beautiful centre clearance saw him pinpoint a pass to Bailey Williams 35 metres out directly in front – which unfortunately was missed.

His voice in the final term was a good focal point, screaming to his Stingrays teammate to switch the ball into the opposite pocket deep in defence. His spread was good, able to get on the end of three marks. He continued to attend centre bounces late in the game, with stints on the bench in a game that mostly saw him play as a true inside midfielder.

Clark attended 18 of the 25 centre bounces and played as a true inside midfielder, compared with past weeks where he has been dragged deep or played on the flanks. His quick hands at the stoppages are his strength, but by foot was how he registered all three of his centre clearances. His best clearance was a beautiful kick that hit Bailey Williams on the chest 35 metres out directly in front. As more of an outside player in 2016 – playing quite regularly across half back, it’s good that he has been able to work on his contested ball and work harder as an inside midfield. Hopefully he continues to attend this high number of centre bounces in the TAC Cup – while likely top five midfielder Luke Davies-Uniacke is at school football.

The Calder Cannons kept Hunter Clark largely uninfluential dragging him deep in defence with just the seven disposals in the opening half of their Round five game. It was a different game against the Chargers, with Clark playing as a true inside midfielder. He did have 27 disposals – but kicked at 43 per cent with five clangers by foot. Nearly all of his disposals occurred infront of the Shepley Oval Grandstand – whether that was a coincidence or not.

Clark has shown good contested ball winning ability and quick, clean hands in close that should appeal to clubs.  If he can clean up his kicking, there’s no doubts he is able to push himself for a first round berth- but as we have seen in past seasons with players who have a low kicking efficiency have found themselves down the draft boards of clubs.