Weekend That Was – Round 7 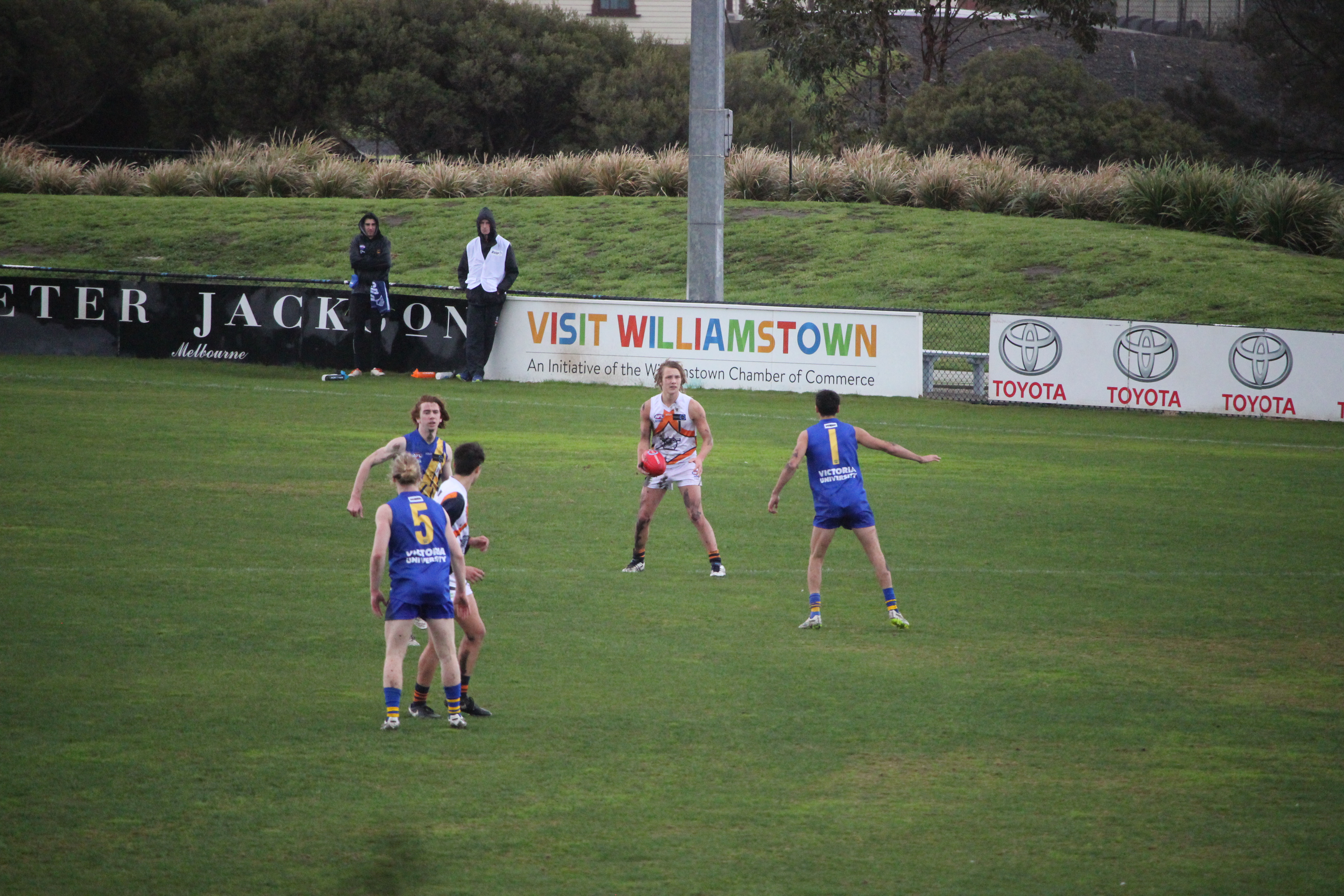 A DROUGHT-BREAKING win to Calder Cannons on the weekend has ensured every TAC Cup club will have sung the song at least once by the midway point of the season.

Calder won 18.9 (117) to Gippsland’s 12.13 (85), with bottom-age talent Jack Bytel racking up 34 disposals (17 contested) at 73.5 per cent efficiency, to go with 10 clearances, five marks, three inside 50s and a goal. Mitch Podhajski became a defender-cum-forward booting six goals from 23 disposals and 10 marks, while Brad Bernacki had 20 disposals, five clearances, six inside 50s and four rebounds in a strong all-round game.

For Gippsland, Aidan Quigley put in another strong performance with 20 disposals, five inside 50s and three goals, while Callum Porter had 18 disposals (88.9 per cent efficiency), six clearances, six tackles and booted a goal.

Meanwhile at the other end of the ladder, there was no drought broken for the impressive Geelong Falcons who continued on their merry way with a 65-point win over Northern Knights. The Falcons moved to 7-0 to start the season and rarely looked like losing after a seven goals to one second term. Northern fought back in the third to the Knights’ credit, but Geelong ran out too strong in the last with six goals to one in a 16.16 (112) to 7.5 (47) win.

Cassidy Parish’s sensational form continued with 33 disposals (72.7 per cent efficiency with 18 contested possessions), 12 clearances, seven inside 50s and a goal with his season likely to have him high, if not leading the Morrish Medal at this stage. Others that impressed were Lachie Noble who had 28 disposals, eight marks, five clearances and five inside 50s, while Bayley Cockerill and Matthew Ling were again prominent in the midfield. Ethan Floyd played further up the ground and had 24 disposals, five inside 50s and two goals.

For Northern, speedster Jack Petruccelle had 27 disposals (12 contested), five marks, nine inside 50s and three clearances in a pivotal link-up role, while Sam Binion and Christian Farchione both amassed good numbers with nine clearances, six inside 50s and two goals between them.

Murray Bushrangers locked in second spot with a commanding 23-point victory over Sandringham Dragons. Level at quarter time, it was the Bushrangers’ second term of four goals to zero which set up the victory, running out 13.11 (89) to 9.12 (66) winners.

Ben Paton continued to stake his claim as a potential over-age draftee notching up 26 disposals, two marks, two tackles, four inside 50s and a goal. Will Donaghey and Angus Hicks were once again busy, with the latter having 20 disposals (65 per cent efficiency), nine tackles, five inside 50s and two rebounds.

Speaking of impressive over-agers, Hamish Brayshaw could not have done much more in a losing team on the weekend. The Sandringham Dragons inside midfielder notched up 32 disposals, 11 marks, eight clearances, eight tackles, five inside 50s, two rebounds and two goals. Quintin Montanaro had 22 disposals, while Max Lohan’s 10 rebounds from 20 disposals and Aaron Trusler’s two goals from 18 disposals were also among the better Dragons’ efforts.

Eastern Ranges moved back into the top eight with another victory, this time a 29-point win over Bendigo Pioneers. The Ranges jumped the Pioneers at Box Hill in the first term with a six goals to two quarter. From there it was relatively even with the Ranges only winning the next three quarters by five points in a 14.13 (97) to 11.2 (68) win.

Thomas North earned the AFL Draft Central TAC Cup Player of the Week with 43 disposals (74.4 per cent efficiency), six marks, 12 clearances, two inside 50s, four rebounds and three goals for the Ranges. Kye Quirk was also ultra impressive with 31 disposals and nine marks, while Jaidyn Stephenson had a season-high seven clearances to go with his 22 disposals, four marks, five inside 50s and four tackles.

It must have been a game for big numbers with Pio Darby Henderson also suffering leather poisoning courtesy of 41 disposals, six marks, two clearances and nine rebounds in his best game in the TAC Cup. Along with Henderson, Laine Fitzgerald and Matt Harvey both recorded 27 disposals, with Harvey also booting two goals.

Greater Western Victoria Rebels survived a third quarter scare from the Western Jets to post an eight-point win over their opponents in the first game at the newly developed Eureka Stadium on the weekend. The Rebels led in a close game up until the third term when Western booted three goals to one to take a 10-point lead into the final break. The Rebels hit back with a four goals to one final term and finish the game off 11.5 (71) to 9.9 (63) win.

Aiden Domic was silk once again, as he amassed 19 disposals at 84.2 per cent efficiency, eight marks, seven tackles, six inside 50s and a goal. Others that were solid included Trent Reed with 21 disposals, nine tackles and five clearances and Lloyd Meek who provided more of a forward target in the match with 15 disposals, four marks, nine hitouts and a goal. Dale Cox had his best game of the year with 12 disposals, five marks and nine tackles.

For Western, it was another promising game from Nicholas Stuhldreier who had 34 disposals (76.5 per cent efficiency), four marks, six clearances, three inside 50s, three rebounds and 11 tackles. Others that stood out included Connor Thar with a season-high 28 disposals, four marks and five clearances, as well as Jaden Rice (24 disposals eight clearances, eight tackles).

In the televised game of the round, Oakleigh Chargers enjoyed a huge 88-point thumping win over Dandenong Stingrays in their retro strips. Wearing the purple and gold, Oakleigh stormed to an early lead and did not take the foot off from there, booting at least four goals in each quarter to run away with a 20.8 (128) to 5.10 (40) victory.

Matt King stood up for Oakleigh off half-back with 28 disposals, 10 rebounds, seven clearances, four marks and four tackles, while Sam Harte had 28 disposals, eight inside 50s, five marks, five clearances and a goal as the key transition player into the forward line. Others that would battle for the best votes were Jack Higgins and Toby Wooller who both hit the scoreboard with four goals, with Higgins having 90 per cent efficiency in a game where he found more time and space to work his magic.

For the “Redlegs” Hunter Clark was busy once again with 27 disposals (although just 43 per cent by foot), five marks, eight clearances, six tackles and two rebounds. Mitch Cotter continued his work in an under with 27 disposals (19 contested), five tackles, nine clearances and four inside 50s. Bottom-age ruck/forward Bailey Williams looked the best of the lot early, booting Dandenong’s first three goals and finishing with four from 10 disposals, six marks (four contested) and 36 hitouts.

After seven rounds, Geelong is clearly the team to beat with seven wins and a superior percentage of 208. Murray six four points clear in second ahead of Oakleigh, followed by Sandringham and Northern with four wins apiece. The Rebels, Eastern and Dandenong round out the top eight with last year’s four sides that missed finals – Gippsland, Bendigo, Western and Calder at the tail-end of the ladder.