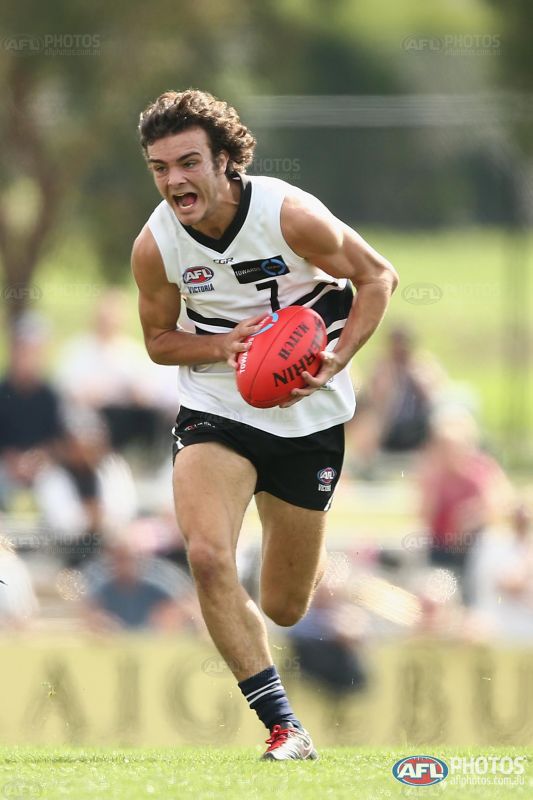 #3 Braedyn Gillard – The bottom-ager was a real force for the Knights with his aggressive style and ball-winning abilities. Complimented his toughness well with some finesse and mature distribution. Also has a good knack of sneaking forward and finding a goal, and will really make his presence felt once he adds a bit of size over the next couple of years.

#7 Jack Petruccelle – Was industrious all day and really made an impact with his strong bursts forward, using his pace to send the Knights into attack. Took some impressive marks overhead and showed promising improvement in that area as he often rested forward. Keeps rising in stature with each passing game, finishing with 20 disposals (17 contested).

#8 Nick Coffield – Stood up again when his side needed it and was very slick in areas all around the ground. Used his deft side-step and clean hands well in traffic, while also proving he can use his big frame to provide a bit of grunt at ground level. Capped off a decent shift with the winning goal in the dying minutes.

#14 Adam Tomaro – By no means the most consistent or overall influential player, but the 19 year old comes and goes in exciting passages of play. He played a key role in the third quarter up forward with his great defensive pressure and nous around goal. Always shows something, but needs to produce it more often

#18 Jamison Shea – Another 19 year old, Shea continued his impressive form with a dominant best-on-display. He moved forward throughout the game to bag four important goals, but also roamed around the ground and racked up plenty of the ball. His versatility and ability to play either small or tall is a great asset, but he lacks an x-factor at the moment. Always plays his role nonetheless, which would please coach Justin Wenke.

#30 Oliver Wilson – Made his prensence known with 11 tackles for the day. There’s not much of him, but his desparation and effort was great to watch – most notably his game-saving tackle in the last quarter as his opponent ran into an open goal.

#2 Hunter Clark – Came in and out of the game but showed off his best attributes whenever he got the ball. He has brilliant hands and often flicked the ball out at ridiculous angles to find teammates. Is also quite strong despite his slight frame, and finds his way out of danger a lot of the time because he is so good on both sides of his body. Played a bit more through the middle, which might help improve his consistency.

#5 Angus Paterson – Was an absolute rock down back for the Stingrays, and his performance probably deserved a win to go with it. He held down the defensive 50 well and intercepted a lot of the Knights’ forward fuores with his notable reading of the game.

#20 Tom De Koning – Was another who shifted in and out of the game, but came out of it with a respectable haul of three goals. Showed the class we would like to see more of with a slick pick-up and finish on his left foot deep in the pocket – he makes it look easy at times.

#29 Bailey Williams – The bottom-ager has a ridiculous leap, and probably bettered decent opposition in Joel Grace on the day. Moves around the ground well and made his presence felt with a massive grab early in the day. Dandenong’s prime movers in the middle will appreciate his ruckwork in games to come, his hands were impressively deft.

#42 Jai Nanscawen – Another 17 year old who made his mark on the game. An impressive basketballer by all reports, Nanscawen showed great poise and decision making throughout the game. He snuck forward to snag three goals which put his side in a good position, and found targets well going forward.

#2 Kane Farrell – More midfield time for Farrell this week and the Pioneers used him more in the attacking half than the defending half. Normally a good kick – had a few kicks that he missed that he normally makes on Sunday. Like him more as a half back.

#15 Darby Henderson – Racked up the football with 35 disposals, but wasn’t a huge influence. Is a player that you know can find the football but I question how damaging he can be. If he can make some more of his disposals really hurt the opposition he could lift himself into consideration to be drafted.

#18 Angus Schumacher – Killed the Dragons in the first half across half back but also went through the midfield. A nice left foot kick and he found the ball on 28 occasions. One of keep an eye on.

#7 Aaron Trusler – Again used his speed and goal smarts up forward. Kicked a big goal from 50m out in the third quarter and has everything you want in a small forward. Finished the day with two goals.

#11 Hamish Brayshaw – Another solid performance as the Dragons’ best player for what was ultimately a disappointing day. Won plenty of the ball inside using his strong frame. His leadership and voice was impressive throughout the day, willing his teammates to fight back into the contest.

#22 Quintin Montanaro – Continuing to play good football – but the last two weeks there have been some minor hiccups. At times under immense pressure he has gave the ball up to the opposition, in particular with a few clangers by hand. Looks much more comfortable in uncontested situations and if he can clean up his work when under pressure it will help him lift his draft stocks.

Weekend That Was – Round 6 – AFL Draft Central